As much as I dreaded the ending, the urge to watch it till the end is much stronger than ever. Three months feels so short and here I am, writing the last chunk of recap (sort of). So many emotions rolling in and out, so much turns, but it’s worth the ride. It gets bumpy at times, and I’m glad because despite so many unexpected surprises that made my heart and head pounded, I finished this drama without a glitch. It’s not exaggerating at all; this might be the best dramas I’ve ever watched – Tree with Deep Roots.

A friendly advice from me: if you haven’t finished it yet, stay away from this. Too much spoilers ahead and it’s better if you watch it first.

So, to pay for the unfinished recaps, here they are: recaps and my thoughts for some scenes, episode by episode. It’s going to be quite long. 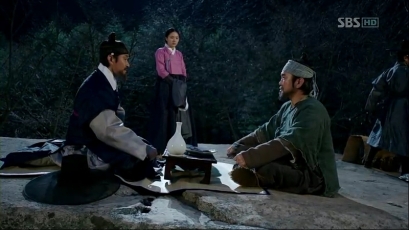 The most anticipated meeting: Sejong and Jeong Ki-Joon. They could be friends as they were almost of the same level, be it at education or their ability. That also implies their possibility of being a great enemy to each other. That’s why both of them tried to influence each other to embrace the ideas from their own sides, but they couldn’t avoid from admitting that the opponents’ view were also plausible. Both of them were really good with words and they were almost wavered from their original intention, if not for the people around them.

However, the most shining character that night wasn’t any of them or the men with their swords; So-Yi was the one who held the key to their temporary resolution. 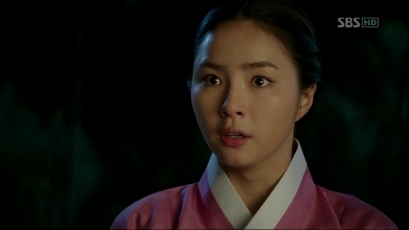 She was the only woman without any protection yet she’s managed to save everyone from killing each other through her words alone. Even an assassin obeyed her, who’s considered a mere chick during that time. Here’s the plus point to this drama: it doesn’t follow the suit of many sageuks, solely focusing on the men’s ability. It also highlighted the power that a woman could hold and bring about changes to people around her. That being said, the meeting concluded with a clean break, only tainted with Jeong Ki-Joon’s vow to block the letters, no matter what’s going to happen.

The confusion and rage led to another person’s life being sacrificed..

Yeah, the Prince. Minister Jeong’s teary eyes. Moo Hyul’s hesitation. And Sejong’s heartbroken smile. The tears I held flowed upon seeing Prince Gwangpyeong calm, frozen face. Sejong’s fruitless effort to put his deceased son’s hand onto his shoulder broke my little heart. But still, the King didn’t even shed any tears. The reality, anger, sadness, and guilt all dawned upon him, and he wailed like a man who lost his mind.

Dearie Chae-Yoon wasn’t going to watch Sejong waver and made So-Yi’s efforts went into waste. He quickly put the King back on his track, gearing up the promulgation of Hangul for the sake of the dead prince. It’s a relief Sejong got an unofficial advisor/teacher beside him, who taught him not to bullshit around.

However, it looked like Sejong’s not that recovered from his sudden loss of his son, and everything was in turmoil. Minister Jo took the charge of pursuing the prince’s killer, and guess what? Everyone around him was captured and put through investigations and tortures like what he did during Taejong’s reign. So-Yi and Chae-Yoon weren’t excluded; Choi Man-Ri and friends also spent their nights in the prison. Sejong was truly losing his mind over Prince Gwangpyeong’s death, according to Mil-Bon and co. Except that they’re completely wrong this time.

Sejong and co.’s plan worked, and Mil-Bon didn’t suspect anything. But suddenly Yoon Pyung got smitten by So-Yi and decided to give the suggestion to bring the deposed court ladies to their side. Suddenly Jeong Ki-Joon thought that it might be a good idea, and poof! Nothing was a secret anymore. It was all an act to get the court ladies out and spread the letters to the world. Screw you, Mil-Bon.

Also, Lee Bang-Ji met his death in Chae-Yoon’s arms. I’ve never thought Minister Jo would be the one who tended him and took care of him. Amazing.

Off they went to the rural area, the court ladies led by So-Yi and the guards led by Chae-Yoon. While they’re off doing their tasks, the Mil-Bon on the other hand was breaking apart. Jeong Ki-Joon wanted to block the letters, Shim Jong-Soo wanted to change the system, and Lee Shin-Jeok was going to protect himself. But they’re still Mil-Bon, because their aim was still the same: to stop whatever Sejong was doing. Their respective representatives: Yoon Pyung, Shim Jong-Soo himself, and Kyun Jeok-Hee from Taeppyunggwan headed went to get the court ladies, and most importantly, the explanation of the letters: haerye. The race had started!

The winner? Yoon Pyung, with 3 court ladies in his hand and a mass murder record under his belt. Luckily the kids didn’t learn anything yet, if not, he might be the next Grim Reaper.  Shim Jong-Soo and (his possible girl) Kyun Jeok-Hee formed a truce (for how long? Still unknown) in order to get what they’re searching for. Chae-Yoon was always a few steps too late this time, apparently.

Mil-Bon was troubled, and so was Sejong’s team. The key to So-Yi’s whereabouts was snatched away from Chae-Yoon when Gaepayi took her away. The last part was so nerve-wrecking: Lee Shin-Jeok and Sejong’s playing ‘Mil-Bon and the King’ over a banquet while Shim Jong-Soo met Jeong Ki-Joon to make himself the next Bonwon.

Sejong acting like a father to So-Yi in her memories, pleading her to return to the palace to write the haerye. Cue tears falling from my eyes.

Sejong made his move over at the palace while So-Yi and friends were still trapped over at Mil-Bon’s hidden camp (or whatever it is). Chae-Yoon found the camp and saved Yeon-Du from her close call of death. Phew! The royal guards raided the camp at the same time Taeppyunggwan interrupted the Root and Shim Jong-Soo’s meeting.

Shim Jong-Soo was captured; Jeong Ki-Joon ran while dragging So-Yi with him, Yoon Pyung stayed behind, Kyun Jeok-Hee chased the Root. Gaepayi came and scared the shit out of Kyun Jeok-Hee, causing her to retreat. Jeong Ki-Joon then finally put two and two together and knew, So-Yi was the haerye from the beginning. Chae-Yoon was still searching for So-Yi. Faster, Ddol-Bok!

I kept crying throughout this episode, although I was on my third time watching it.

The letters spread; aristocrats blend in with the commoners..

Chae-Yoon looked around proudly before closing his eyes in the arms of his savior.

I felt guilty for imagining Sejong being the happiest man when So-Yi and Chae-Yoon got married, but he was the one who put their hands together, even in their deaths. The wooden ducks, and their dreams… (T_T)

What about Pyung and Jeong Ki-Joon? Pyung got killed (again) and Jeong Ki-Joon met Sejong for the last time, giving him his words before he died on Sejong’s throne. Did he wish for that? We’ll never know, for sure.

Shim Jong-Soo got the Bonwon title, finally. The scene where he asked Han his real name was so brilliant. This drama started off with a fiction, but it ended with a real history fact. It’s genius of the writers to reveal his real name: Han Myung Hee, the Prime Minister under Prince Suyang during his reign as Sejo.

In history, Han was the one who assisted Sejo in abolishing Jiphyunjeon and leading to the Six Martyred Minister event, in which Seong Sam Moon and Park Paeng Nyun were to be killed. I thought it’s such an irony in the drama when Han accidentally ran into Sam Moon and Paeng Nyun. Han’s their indirect assassin-to-be, and Sam-Moon could feel the strange vibe he gave off. 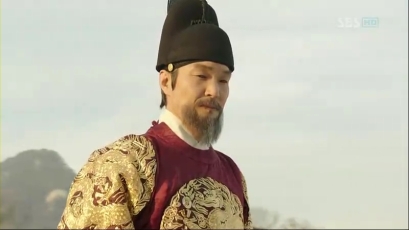 The scene was a replay version of the first appearance of Sejong, but he’s much toned down his words and lonelier than ever before. And the final scene: a continuation of Chae-Yoon’s dream.

The ‘what ifs’ would never end. Should the scene be true, it’s probably a scene descended from the Heaven to tell us: they’re happy with each other, somewhere far away from here.

Things that I hoped didn’t happen in this story. A happy ending might be able to satisfy me, but I think it’s the most logical ending to a mission fated with danger and blood from the beginning. The people didn’t die in vain; the results can be seen even after they’re gone. Their efforts were not left just like that, but embraced by hope and dignity of the people who were still alive. The ending provided a closure, but also hinted at the history that would never end, just because one person’s story was coming to an end. Thank you, show, for giving me the most memorable three months and being the best Kdrama I’ve ever seen to date. Thank you again, although I’m crying like a cow and used up half box of tissue.

3 thoughts on “Tree with Deep Roots: Towards the End”