With the recent buzz about the latest Reply series on the web, most of us can’t help but recall all the good, crazy old times with Reply 1994 and Reply 1997. Jung Woo was one of good things about Reply 1994: he swept off most of South Korea’s population with his Oppa-ya’s phenomenon and made us consider getting a kind boyfriend like him, even with his strange way of managing his life. It’s time to put Trash aside for a while as Jung Woo is set to make his comeback on the big screen through the movie C’est si bon, and poses for Vogue’s February edition.

The movie’s lineup is impressive: from Kim Yun-seok to Kim Hee-ae, not to forget Jang Hyun-seung, Kang Ha-neul, Jin Gu (<3), and Han Hyo-joo, just to name a few. The title refers to a live music cafe where the characters met and C’est si bon is based on a legendary folk music group Twin Folio, who was well known in the 1960s to 1980s. It will follow the story of the group but instead of duo, the movie spins the plot to make the group as a fictional trio. Maybe there will be a twist somewhere in the movie, as there’s a muse involved and the story spans from the members being in their 20s to 40s. I hope it can join Sunny and Introduction to Architecture as a feel good nostalgic movie with a solid plot!

Acting as one of the musicians, Jung Woo brings along his musical instruments for the pictorial and rocks the 70s fashion (jeans jacket and jeans, anyone?). He’s probably not going to be in a drama anytime soon, with another movie, Himalaya in the work, but at least we get to see him popping around in magazines and news for the movies. Oppa-ya! 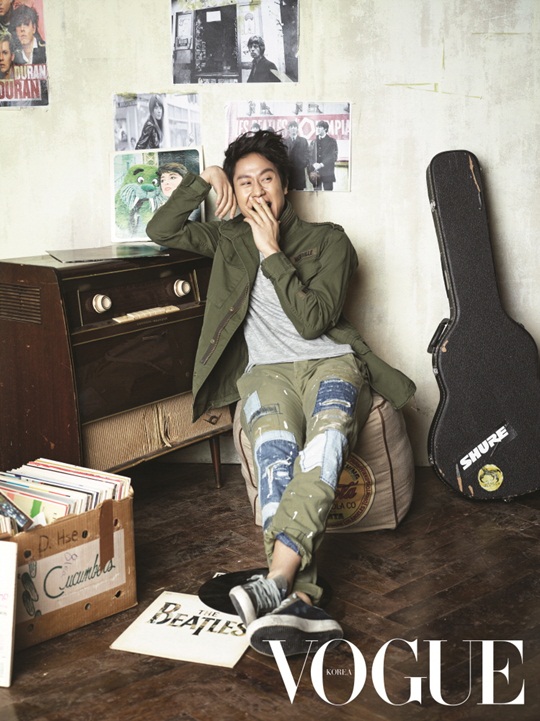 2 thoughts on “Jung Woo the Musician for Vogue”