..that’s the English title of Queen Inhyun’s Man, the latest talk in the town of kdrama land. Believe it or not, I never thought that I would be sucked into watching the drama before, but the teasers managed to make me check the first episode out. The rest is history, as I kept watching and watching until the latest episodes. If people ask what’s the reason for this drama to be so enjoyable for me and the rest of kdrama viewers, I don’t really have the answer. For me, it’s just because Queen Inhyun’s Man gives me the joy I used to have when I watched dramas few years back.

The drama premise is simple and that’s probably where it holds the charm to attract people: a man who time travels from Joseon to our time. Sounds familiar? Yes, if Rooftop Prince is in your drama watching list right now, that’s the same concept for both dramas. Probably the reason why people are comparing Prince and Queen (why it’s all royalties who made it into the titles?) and some people checks this drama out just to know whether it’s the same or not with the current hype Rooftop Prince. The verdict? It’s totally different. 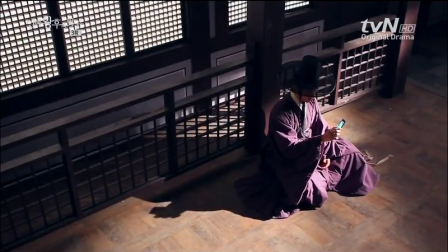 We got our wise scholar Kim Boong-Do (Ji Hyun-Woo) being lucky enough to travel between two different eras: Joseon Dynasty and the modern world, all thanks to an amulet he got from Yun-Wol, a gisaeng who was once his household’s servant. He is a government officer from the Western faction during the reign of King Sukjong and being a loyal Queen Inhyun’s supporter, he experiences few life-threatening conditions. Royal Concubine Jang’s supporter, Left State Mininster Min-Am’s radar is on him and Boong-Do is being watched closely, hence he experiences some murder attempts during the past.

Take the near-death situations, plus the time-bending amulet, and pop! Welcome to the modern world, Joseon Scholar Kim Boong-Do.

If the real thing is going on during the past as he’s transported to the present, a drama production about his era is being made into drama by the time he arrives. Whoa. Talk about being confused. He’s lucky enough not to appear right in the middle of the filming, although he’s very close to it. It must be fated when he meets the modern Queen Inhyun, Choi Hee-Jin (Yoo In-Na) the first time he travels and she’s an actress playing the queen’s part in the drama ‘New Royal Concubine Jang’.  So..he has another queen in the modern world?

Reading this again, the drama seems to be complicated at first, but you really have to watch it to judge it for yourself. How can I resist the temptation when I keep watching the episodes repeatedly and still giggle like a little girl when I read the recaps? It must be the leads. Yes, blame the cute Hee-Jin and Boong-Do.

I adore Yoo In-Na pretty much from the start when I first saw her in Secret Garden and I’ve been keeping tabs on her dramas except Birdie Buddy, which I didn’t finish. Hee-Jin is pretty much like herself: pretty and cute. Hee-Jin might be an innocent girl outside, but she got her own share of spunk and wit. She has the feeling of wonder in her eyes when she discovers Boong-Do and his out-of-world explanation about his existence. She doesn’t freak out and even feels attracted to this total stranger. 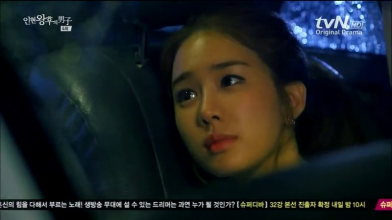 That look of wonder soon turns into affection..and she makes me feel like I’m falling in love. 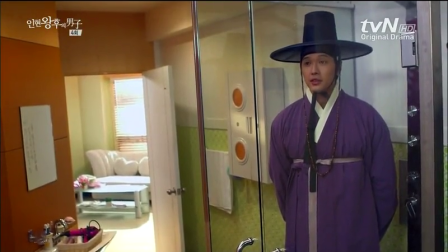 I just can’t describe how much I love Boong-Do. How can someone who’s suddenly thrown into a whole different world acts so calm like him? It must be his scholar genes acting up in his system, thinking before doing something. He’s a levelheaded man, taking things into his own hands instead of whining around. He’s indeed taken aback and nervous at times, but he takes his time to look around and learn. I can’t imagine a man, or even a human being like him will ever exist in real life (that’s why this is called kdrama. Duh). 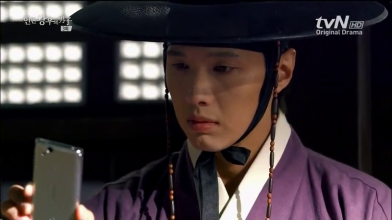 That curiosity. It may kill a cat, but probably not a man.

Now…put the actress and the scholar together. What will happen? 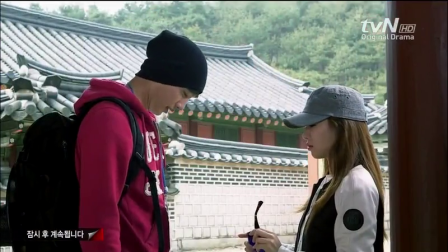 Instead of a bickering couple, we get a kids-like, squee-worthy adorable couple. Whew..that’s a long list of adjective. How can they be this perfect? They complement each other in a quite bizarre way: Boong-Do is a genius with no knowledge about this era while Hee-Jin is the not-so-bright girl but she’s from this era, thus she unofficially becomes his tour guide through the modern days. Although he’s a quick learner, he doesn’t brag that much (or maybe a little, but accompanied with that adorable smile) and still feels so grateful to her. As for Hee-Jin, she can’t help but start to care about the mysterious time traveler. 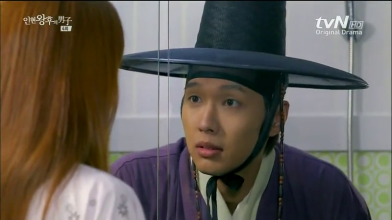 Indeed, who won’t fall for such gentleman?I’d totally be the same if I were her.

Apart from the main couple, here’s the modern day King Sukjong, the bratty actor Han Dong-Min (Kim Jin-Woo) accompanied by the modern Royal Concubine Jang, ‘national fairy’ Yoon Na-Jung (Park Young-Rin). Dong-Min is adorable in his own way but he’s still a childish man who wants things to go according to his way. It’s hilarious at times because his name is almost the same as Boong-Do’s servant, Han-Dong. Pure coincidence or what?

I was afraid I would stop watching because of Na-Jung’s bitchy acts. I’m not a fan of those as I’m someone who’s easily pissed off by them. Luckily, she only acts like that occasionally due to constrain of maintaining her national fairy image. Somehow, she’s like a grown up He-Yi from You’re Beautiful. Probably because of the national fairy thing.

This sends me into several laughing fits. It’s totally different from their real personalities! If only the media knows the reality. Hehe. I predict these two will somehow end up together. 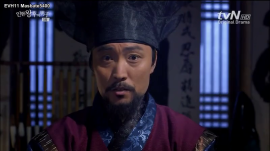 This has to be pure coincidence but it amuses me to think about it. The psychotic Min-Am (Eom Hyo-Seob) was Seung-Yoo’s teacher and Hee-Jin’s manager slash best friend Jo Soo-Kyung (Ga Deuk-Hi) was Seung-Yoo’s sister-in-law in The Princess’ Man. These little details sometimes make my drama watching more entertaining, trying to figure out where I’ve seen the actors and actresses before. 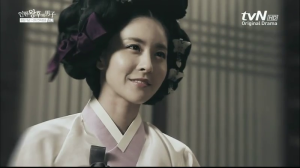 Yun-Wol (Jin Ye-Sol) still has a very minor role in the whole ordeal. I like to see her around (she has such a sweet smile!) and hoping that she will play a more significant role in the coming episodes.

I really enjoy watching Queen Inhyun’s Man and based on the first six episodes, its simplicity is the main attraction for viewers to fall in love with this series. Seeing Hee-Jin and Boong-Do is like watching two kids trying to get to know each other. Their sizzling chemistry makes me all giddy, enough for me to hunt for recaps and continue to squeal with delight when I read the recaps (HERE and HERE). Looking at our world from Boong-Do’s point of view is also another point that shall not be missed.

Plus, it’s not an everyday occurrence to be able to know about your crush from history books. Seeing his name in the annals is another privilege. So, what are you waiting for? Go and check it out~!

*With that being said, the ban is lifted and my hiatus has officially came to its end. Hurray!

Have a look at the pretty opening. I can’t help but fall in love all over again with this drama!

6 thoughts on “Queen and I”