When the trust between two parties is at the verge of being broken, what could be the best solution to return to the point where everything was once stronger than anything else? The thing that Suk-hoon is afraid of is happening between him and Hong-joo, and they are at the turning point where they could be embarking on a journey of no return. Maybe if something like a time machine exist, it would be useful during times like this..

While Ji-sun was at the pension to see Roy, Hong-joo met the gynecologist, who turned out to be Se-young’s friend. Hong-joo seemed confident to go through with the procedure of getting pregnant through IVF but when asked about Suk-hoon, she’s suddenly reluctant again. It just got worse when she saw Suk-hoon with Se-young and she didn’t even try to hide the fact that she disliked her. Se-young continued to intimidate her, pointing out that the money she spent on Suk-hoon was totally worth it, considering how desirable he was. That made Hong-joo stormed out of the building with anger and Suk-hoon was like fueling her burning wrath when he said that he helped Se-young on his own free will. Their argument was cut when Hong-joo received a call, telling her that Roy went missing from the pension. Min-woo got to know about the matter from Hong-joo and he rushed to the place, as Hong-joo continued to ignore Suk-hoon’s text and call.

Se-young went straight to the office although she was clearly not that well yet and Young-chul gave her the report about the meeting earlier. He’s well aware of the consequences when he decided to accept Suk-hoon’s help but he was only thinking about the best solution for them. Young-chul wondered if Suk-hoon could be hired as Dongsung’s staff, but Se-young doubted he would accept the offer, considering what she witnessed earlier. As for Hong-joo, she reached the Yangpyeong’s pension and went straight into the nearby woods, looking for Roy. She saw a shoe nearby the lake and thought that the boy might had drowned, but Min-woo arrived and assured her that the boy was still safe. But then, Ji-sun arrived with a nervous Roy on the backseat, much to Hong-joo and Min-woo’s surprise. The cat’s out of the bag! Ji-sun warned him that he won’t get out of the issue easily but Hong-joo assured Roy, who’s still troubled over Ji-sun’s sudden presence, that Min-woo would resolve the problem.

Hong-joo’s worries didn’t stop there as she’s still disturbed over the conversation she had with Se-young. It’s the same for Se-young, who kept thinking about Hong-joo’s words and Suk-hoon, who never leave her mind. She was thinking of calling Suk-hoon about the job offer, but the thunder stopped her. Maybe that’s a good warning since Suk-hoon won’t be in the mood to talk with her, being focused on his way to the pension. He decided to have a talk with Hong-joo after all and she went out in the rain, not really in the mood to discuss anything; but then, she admitted that Suk-hoon’s decision to choose Se-young over her earlier bugged her to no end and she felt that she began to lose confidence in their marriage. *Gasp!* Being an honest man he was, Suk-hoon had to admit that he thought about Se-young at times and Hong-joo thought that they might need some time to reconsider their feelings. Min-woo interrupted their argument in the rain, telling Suk-hoon to go back for that night. 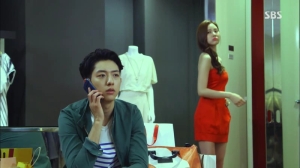 Suk-hoon drove back home with no energy left in him and he nearly got into an accident; luckily, the truck of doom wasn’t meant for him! Hong-joo didn’t like the fact that Min-woo got involved in her argument with Suk-hoon and on his way home, Min-woo happened to see Suk-hoon in the car but decided against approaching him. The eventful night came to an end and a new day came, but Se-young found herself too tired to leave for work and decided to to take a day off. Hong-kyu had managed to put together the money for Se-jin’s car repair cost and wished to have no further encounter with her, but he got stuck with her when he pleaded (complete with puppy eyes!) for him to accompany her for a shopping spree. LOL, she was enjoying the time she got to spend with him while he wasn’t too pleased to follow around a lady while holding her shopping bags. He didn’t really like to see how easy she was spending that much money like pouring water. She didn’t hide her liking for him but he wished not to see her again, but he accidentally left his key among the bags. Well, let’s just day fate had something planned for these two!

Se-jin suddenly received a call from Chairman Yoo, who informed her about a family emergency: she should go and visit Se-young, because her sister didn’t go to work. Suk-hoon was still thinking about what Hong-joo said to him the night before while Hong-joo was also thinking about him. She told Roy that she did marry the person she loved but there were people who might not end up together with the person they loved due to various reasons, Se-young had Se-jin and Mrs Hong visiting her after learning about her absence from work, considering how rare it was for her to do so. Se-jin was so worried for her (it’s so sweet to see them like that!) and so was Mrs Hong, who recommended her to visit a gynecologist since it might be an early sign of menopause. Suk-hoon had decided to leave the house for a while as Se-young received a call from Attorney Choi, who wanted to give her some information regarding an important person related to M Hotel in Hong Kong.

Ji-sun went to Min-woo’s office with some documents but she wasn’t asking for a divorce; instead, she wanted to secure a fortune of inheritance for her daughters in return for bringing Roy into the household, She’s smart, knowing that he won’t file for a divorce and watch his own reputation turned into dust. Suk-hoon saw his father-in-law on his way out but he only told him that he got a job which required him to move out temporarily. It’s clear how much Hong-joo’s father adored Suk-hoon, considering that he was the first person to make her happy. He informed Hong-joo about him moving out and agreed to give a thought about their marriage, but he still had some hope in returning to the happy couple they were once. Se-young went out to meet Attorney Choi, who offered to help her but she refused the offer, thinking that she wanted to achieve it with her own effort. He noted that she had changed after meeting Suk-hoon, but she told him that it wasn’t like what he was thinking.

Suk-hoon decided to move in with Young-chul temporarily and he commented that the widower pad looked like a pigsty. LOL! These two are cracking me up with their constant friendly bickering and Young-chul dragged him outside for a night’s out. Min-woo finally got the chance to tell his mother about Roy and she was overjoyed, but not for that long! She turned sour when Min-woo showed her the inheritance agreement which Ji-sun gave him earlier, but Ji-sun had the upper hand this time. Yeay for winning over your mother-in-law this time! Min-woo thanked Hong-joo for her help all this while, but Ji-sun was thinking that Hong-joo could be hired to become a babysitter at their house, since, you know, Min-woo wouldn’t dare to flirt in front of the kids. HA. He put on his extra-kind face, asking for her to treat Roy well and she told him that she won’t be an evil stepmother. Uh-huh..I’m not that positive. As for the boy, Roy spent his last night with Hong-joo crying since he won’t be living with her anymore. 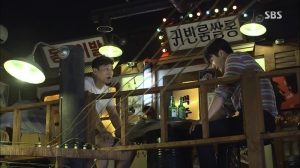 Suk-hoon spilled almost everything to Young-chul, who could guess that Se-young was the reason for him to move out of Hong-joo’s house. He knew that Hong-joo would be suspicious of him, and Suk-hoon admitted that he couldn’t stop thinking about Se-young, although he loved Hong-joo. Oh no, bad news! But at least he acknowledged it! Se-young recalled the moment she told Suk-hoon the offer back in Hong Kong and brought out Hong-joo’s shoes which were abandoned by Suk-hoon when he stormed out of her suite. She tried them on and wore them to work on the next day. Since she had been tipped about the CEO’s whereabouts, what’s left was for her staff to find out more about the person. Attorney Choi told Min-woo about his deed but Min-woo decided to let it pass this time.

Min-woo called Ji-sun since she was the one who would be fetching Roy and she was waiting outside the pension as Hong-joo helped Roy to pack his stuff and dress up. Both of them were saddened with the impending separation but Hong-joo hugged him, consoling the little boy. She told Ji-sun several things about Roy but Ji-sun’s reply made Hong-joo (and me) slightly worried for Roy. Min-woo continued to work with Han-soo to follow after his wife and despite Attorney Choi’s advice, he thought that he’s doing the right thing. He’s up for the challenge of dealing with a person with anonymity surrounding him while wondering what Se-young would do this time to get the hotel in her hands. 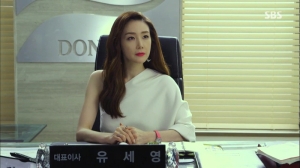 Suk-hoon got ready, all suited up probably for another interview, but it turned out that he was going to meet Se-young. She found it a surprising turn of event to see him at her company, considering the fact that he turned down her offer before. He went straight to the point: hearing that she’s hiring for the M Hotel project, he offered three weeks of his time to be sold to her. Would she buy his time again?