It’s hard to believe that we’re almost halfway through the year 2014 and I feel like I haven’t accomplished anything yet for this year. Looking back at my dramalist, I realize that I only completed four dramas this year, excluding those which started airing in 2013 (King’s Daughter Soo Baek Hyang, Empress Ki). Unlike myself in several years back who could fit more than ten dramas in my watchlist at a time, my current watching habit is different. I only pick two or three shows to be watched at a time since it will allow me to focus on the plots and the stories that the dramas want to tell. Yep, I take my drama watching seriously!

I was only watching two currently airing dramas lately and picked another drama for marathon during my travel to my hometown, hence when I finished two of them, it left me with an empty list of dramas to be watched. Since several dramas are gearing up for June and July broadcast, I’ve set my eyes on a few of them..

Ah, Witch’s Romance. It feels like yesterday when I first heard about you but I forced myself not to feel too excited, afraid that it would jinx you. But then, you turned out to be decent on the first watch. Everything felt so right (and RAWR) when the two leads were onscreen: Ban Ji-yeon (Uhm Jung-hwa) and Yoon Dong-ha (Park Seo-joon). The exploding chemistry, the arguments, the bickering, and the mutual understanding between them…everything was perfect, until the Polar Bear Noh Shi-hoon (Han Jae-suk) crashed the party. I understood that Ji-yeon needed to put an end to her love story with Polar Bear, but it was painful to see both Dong-ha and her denying their feelings for each other. Oh well, it’s a drama after all and one is not complete without second leads! Luckily, the conflict drew them closer and it was worth the wait (and the heartache) to see them so in tune, so expressive, and so lovey-dovey with each other. 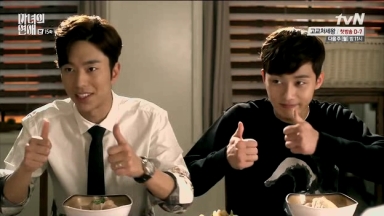 Aside from the main couple, the drama would be not as fun as it was if not for the scene stealer and the ultimate best friend, Yong Soo-chul (Yoon Hyun-min). The mood maker, the clown, and the voice of reason for Dong-ha, most of the plot won’t be complete without him: there would be no lip service and no cohabitation (ohhhh!). Plus, the guy was awesome in his own way, although he appeared to be a little on the jerk side, but that’s before Ji-yeon set him straight and turned him into a Moldy Spinach. Oops, does it show that I like the character? Because I really do! His friendship/bromance with Dong-ha was so squee-worthy that it deserves the best couple award, if tvn has any.

If there are more reasons needed to watch Witch’s Romance, watch it for Ji-yeon’s sidekick aka her last friend, Baek Na-rae (Ra Mi-ran) and her oden restaurant owner husband Kang Min-goo (Lee Se-chang). Not to forget, Ji-yeon’s supportive mother Choi Jung-sook (Yang Hee-kyung) who has her own story!

To all the twitter peeps and bloggers who never stop raving about this drama and Baksa Adeul aka Doc’s Son, thank you so much. I didn’t get to watch it while it was airing around this time last year and saved it for a marathon, but I never found the mood to start it. I was going back to my hometown, where there’s no internet and I thought that marathoning Heartless City would be a good way to spend my time there. I’ve heard good things about it and I’ve never been happier that I didn’t really spoil myself before.

I don’t need to repeat what others had said before but there were several things I learned from it:

1) Everyone should aspire to become a Jung Kyung-ho in suits.

2) You know someone is your best buddy when he’s willing to do everything for you.

4) Makeshift family can be better than a real family at times.

I’m going to stop before I get teary eyed all over again. Just watch it.

I really have to catch up with the drama. Need to find the courage to do so because I am not ready to see Dong-joo and Soo-wan in sadness, let alone send them away. It’s ending this week! *sobs*

Blame Korean contractions for the long translated title. Starring Seo In-guk, Lee Ha-na, and Lee Soo-hyuk (Yaaay!!), it tells the story of a high school kingka who disguises himself as his older brother, who is a department head of a company. Well, that spells trouble with a capital T once everyone finds out about the truth! It takes over the slot left empty by Witch’s Romance.

Also known as Joseon Shooter, the 19th-century sageuk centers around a man who abandons his sword for a gun to avenge the death of his family. With big names such as Lee Jun-ki, Nam Sang-mi, and Jeon Hye-bin (just to name a few) attached to the drama, plus the director’s resume includes The Princess’ Man, the anticipation is high for this one. I can only hope that it will be awesome, because I really like everything disclosed by the production team so far: the stills, the character posters,  and the official posters. It will replace Golden Cross.

Yeon Woo-jin and Han Groo..yeah, I hope I can check this out when it airs! Airs after Gapdong.

After Jung Il-woo was cast in this drama, I was hoping that Moon Chae-won would be the female lead since this year is the reunion year. But then, my wish didn’t come true. At least Go Sung-hee is pretty good from what I’ve seen in Miss Korea. More cast has been added…and please make this a good sageuk, MBC!

The reasons I’m so excited for this one?

It is planned for three seasons, so let’s hope I have enough patience to be faithful to the series until the end.

I’m slightly wary of my expectation because I tend to get disappointed a lot when the drama airs. Do you have any other suggestion on the dramas to look forward to? Now that I look at it, my list is mainly filled with sageuk. Uh-oh!