This was supposed to be a first impression of a certain drama but I soon realized that I could only ramble about the drama instead of giving a proper first impression of it. So it turns into a post consisting of purely rants about me and the dramas I’m watching right now, which aren’t that many. My watching habit has changed. I can feel it! Have I changed? I think so.

Well, growing probably has started to take its toll on myself. In fact, I can feel that I am becoming pickier with my dramas. Instead of blindly picking my dramas just because I love certain actors or actresses, I can’t do it like that anymore. I’m so choosy nowadays that I am sometimes bewildered with this human body of mine. What is happening to me? Where’s the girl who loved everything cute and funny? Who’s this new ahjumma who grins at the sight of wicked grins and bloody revenge?

Sigh. BIG sigh at myself.

Oh, okay. Back to the real purpose of this post. I have to rant about the dramas I’m watching, right? If we’re to follow the title literally…

But first, The Incarnation of Money. Oh, how I miss thee. Very, very much. Bidding  goodbye to the drama was quite easy but I found myself missing it more that I thought I’d be. Is it normal to feel so attached to a drama, to the point of listening to the instrumental tracks and reminiscing how good the drama was? Normal, I think so…in the life of a drama addict, it is. Meow. I miss Cha-don and his revenge. Actually…I miss all of them, the characters.

I’ve gotten around to watch the first two episodes of Special Affairs Team TEN 2, or TEN 2 for short. OHMYGOD it was an awesome ride and worth the wait although I regretted it almost immediately, because it would be more awesome if I were to wait for it to end so that I can marathon it. Seriously, those who love crime-themed drama should check this out. It’s better if you’re on board after watching the first season! Man, this one is so good it’s not even funny.

I really hope they will raise the bar higher, giving us amazing cases, probably better than those in Season 1. I love it so much that I’d hate to see it becoming a drama to be forgotten and people sighing about the useless additional season. Prove that you’re worth the risk, show! Cable dramas rocks!!

While we’re still on the topic, I’m becoming more attracted to cable dramas these days. Maybe I need something different for a change and I’m trying to run away from the cliches in the Big 3 dramas. I’m not saying that the dramas aren’t good – in fact, there are some which are quite good – but the plots are being too redundant. Maybe they’re afraid to go out of the comfort zone, trying something new, as there are risks of losing the viewers. That’s why I like cable dramas: they’re different and they aren’t embroiled in the media plays and endless rating games.

Take Nine for example. It uses the same theme, the one that was everywhere in Kdramaland last year: time traveling. Despite the concern that it might be another redundant drama recycling the same plot all over again, Nine proves that it’s different. The difference lies in how the time travel works and the drama isn’t afraid to go against the viewers’ wish that is to see the hero living happily ever after with his woman.

How can a man be so selfless like Sun-woo?! All he wanted was to see his brother happy and little did he know that his life would be changed forever. Darn, how can a hottie like him have to suffer like that? The biggest tease is that the drama gave me the swoon-worthy moments of the OTP in the beginning, separated them in the form of the hardest blow to Sun-woo (and us) and delivers the sweet moments of them in the form of multiple flashbacks. That is super duper painful, because I love the OTP and I just want to see them together, snogging around and having beautiful babies. My wish is that simple.

Nine‘s ratings isn’t that high because it’s a cable show in which not all people have the access to the channel, but it manages to stir the nation with the uniqueness. Therefore, I’m sad to hear about good dramas that have to be axed because of its dismal ratings, for instance the recent thing happened to the drama The End of the World. I don’t watch the drama but I heard good reviews about it, but its episodes are being cut because of the low ratings. What a sad thing to happen to a solid drama.

Another solid drama that, thank God, escaped the ‘Axe Fate’ because of its high ratings – Cruel Palace: War of the Flowers. I’m not really watching the drama but I can’t fight the urge to check it out once in a while. That is how a sageuk should be done. The drama manages to highlight the conflicts among the flowers in the court but at the same time, the fight between the men isn’t left behind just like that. I love Jo Suk-won, I love the Queen, and I love the Crown Princess. They are so strong and so independent amidst the powerful men around them. What’s not to love?! Girl power!

Since the drama is planned to have a total of 50 episodes, let’s hope that it will continue that way and I can have a proper catch up when I’m done with this intense addiction I’m having right now. I’m such a fail when it comes to sageuk….lovely, lovely things everywhere! How can I resist them?

This is for my current crack drama that is Jang Ok Jung, Live in Love. Why so addictive, show?! You’re so addictive it hurts so much! When the characters were sad, I was the one who cried a river. When the leads were happy, I was the one howling with happy laughter. When the people were being kicked around, I was the one screaming at the top of my lungs, cursing at the baddies. I am so overreacting, but that’s who I am when I am too engrossed. That’s why I prefer watching my dramas alone. People will freak out if they see this crazy side of mine. I can’t help it, it’s just my brain tends to be disconnected when I’m concentrating on my crack drama.

As much as I love and adore and dig (and ____ – insert any verb that have the same meaning as love) Jang Ok Jung, it’s such a waste that a drama like this one is being dissed and ditched early in its journey while it’s still finding its own ground, trying to fit into the judging opinion of the viewers. Yes, I am sad and devastated to see it being bashed around the net when I am falling deeply in love with everything about the drama. Not that I really care about it (I think people at the Soompi thread is one the same page as me) but there’s this feeling of being…poked by small needles. I don’t really feel the pain but deep down, it’s something that can’t be ignored when you have to see a drama you love being extremely criticized like it’s some sort of big mistake in explaining a Rocket Science theory.

I understand it well that we, the drama viewers, come from different background and the only thing that unite us is our passion that is Korean dramas. We’re entitled to our own opinions, but still…it hurts.

I should stop being so emotional right now. Okay, I need to revive my happiness by visiting the Soompi thread. Oh, the lively thread that I love so much! Everyone is so supportive and kind and playful. It’s great to spend the time there and I feel like I’m living in that thread. That is some kind of attachment I’ve formed with a thread! I realize that I’ve become a frequent visitor of it when I keep searching for the ‘Awesome’ or ‘Insightful’ icon on Twitter. That is some kind of dedication for the thread. A special shout out for the cool guys and girls there 😉

Visit the thread to join the fun and as a bonus, you’ll get to enjoy the pretty like these: 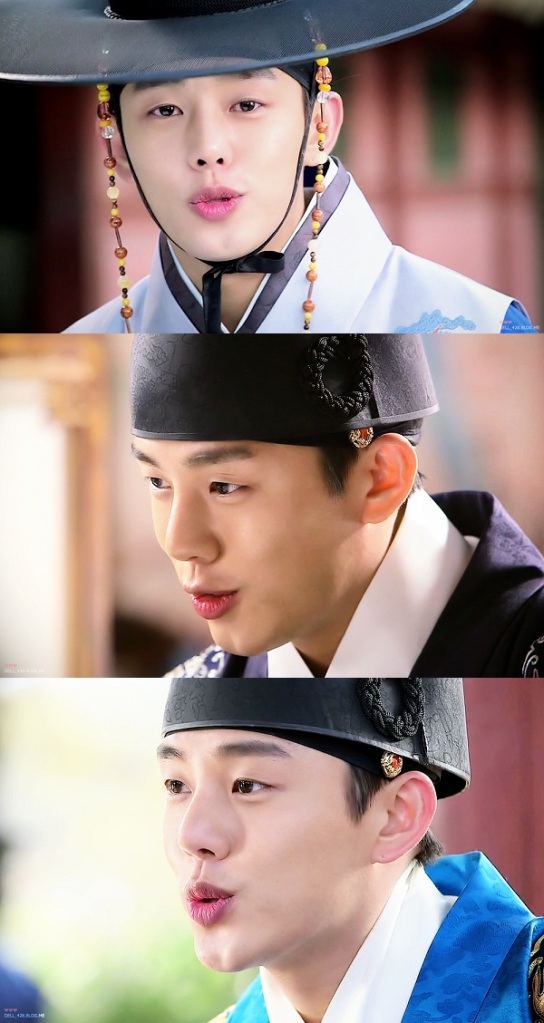 This is another confession: I think I’ve fallen hard for Yoo Ah-in after seeing him in the drama. I saw Sungkyunkwan Scandal but back then, I was too busy pinning on Yoochun (since I was a hardcore Cassie) and had my eyes on Joong-ki, so I kinda escaped the Geol-oh Alri. Let’s just say that I was lucky since I literally saved myself from watching Fashion King (I understand some people are still bitter about that drama’s ending). Anyway, I’m totally captivated by him in the drama. So…yeah. Blame that bad boy charisma. And that smirk. Or those luscious lips. Someone save me, please. I beg you….

*Back to my normal self* Yoo Ah-in aside, the drama is engaging enough to pull me into the bandwagon. I’m already live streaming the episodes, starting from episode 5 last week, and that is considered something new for me to stream a drama this early. I usually prefer to watch a drama live when it has arrived at the crucial parts but this time, I’m willing to make an exception for Jang Ok Jung. Everything feels so right and I can’t really wait until the following day to watch the episode. Impatient for the thrill and I’m not willing to sacrifice the chance to spazz together. I wish today is already Monday!

Watching Jang Ok Jung awakens the history geek inside me and I’ve spent my free time (read: every single day since I’m on my holiday) browsing the internet to read about Joseon’s history. Weirdly enough, I never got tired of it (unlike the reaction when I read one page of my Plant Design textbook) and go as far as taking notes. Heh. I was planning to make some posts but the info somehow gets accumulated and I’m still trying to put it into proper posts. Wait for it, I will publish them no matter what and how long it takes!

Jang Ok Jung also reunites me with my favorite Seol-hwa in Chuno. Kim Ha-eun! I’ve wished to see her in other drama after Chuno but silly me, I didn’t even try to search for her name. Seeing her again reminds me how much I love her portrayal as Seol-hwa to the point of adoring her more than the female lead, and Kim Ha-eun did it again with her portrayal as Sukjong’s first queen, Inkyung. I beamed in happiness and cried in sadness for her. Ah, my lovely Inkyung….

I searched for Conspiracy in the Court after knowing that she was in that drama and boy, it’s GOOD. I have to restrain myself from watching it in one sitting, simply because I want to savour the moment of watching her in a drama. She’s an actress truly born for sageuk!

As a conclusion…sageuk is good. It’s raining sageuk, baby!

P/S: RAIN is a sacred word in the world of those who have watched the latest episode of Jang Ok Jung 😉 Watch it~!