How do you greet your enemy when both of you have decided to get rid of the masks? Will you be as composed as you were with your mask, or you’d feel helpless without it? 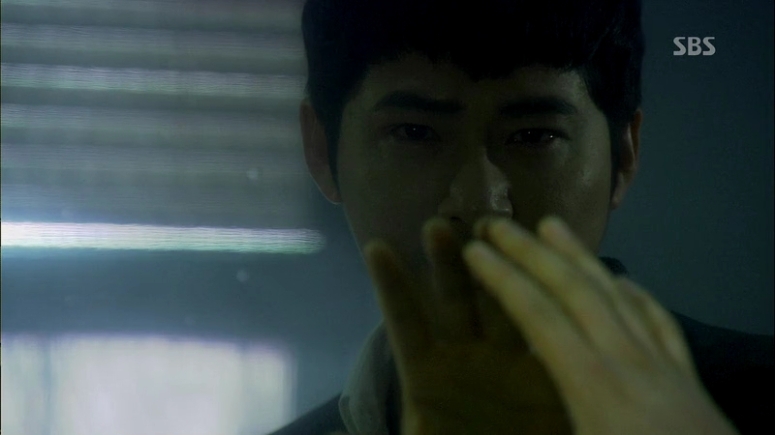 “Pick your swords, for this is not a duel with wooden sticks. Leave your masks behind, for this is a war without any barrier between us.” 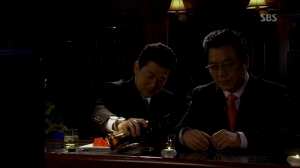 Jae-in manages to track down Cha-don’s location and finds him unconscious after his attempt to get out of the car. He’s sent to the hospital and Prosecutor Kwon is sure that he’s already dead. Se-kwang is so happy to hear about it but their payback doesn’t stop here; they still want to crush everything that is connected to Cha-don – Chungrok, Madam Bok, and Jae-in’s bank. 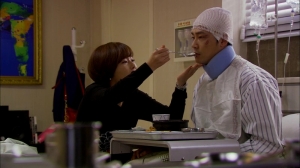 Cha-don decides to put a show in front of others since he suspects that the accident wasn’t a simple hit-and-run accident. Prosecutor Kwon and Se-kwang feel safe to know that Cha-don’s brain is damaged from the accident, while Cha-don is pampered by Jae-in, who thinks that he’s badly hurt. Cha-don hands over the ledger book to the prosecutors through Jae-in and Ji-hoo is set to take the case of Prosecutor Kwon’s corruption. 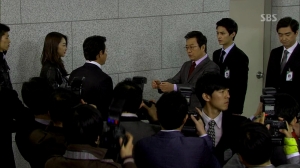 Prosecutor Kwon is happy that he gets to sell his shares to Madam Bok before destroying the bank, but he soon gets to know about the ledger being leaked to the media. Hyuk overheard his father talking about murdering Cha-don earlier and he looks disappointed over the recent news about Prosecutor Kwon. However, Prosecutor Kwon doesn’t feel afraid and he’s confident that he will survive the investigation. 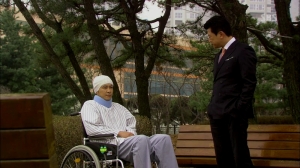 Cha-don quits acting for a while as he watches a news about Prosecutor Kwon and Se-kwang happens to come to the hospital. He finds out about Cha-don’s show and Cha-don doesn’t intend to hide from him about it any longer. Prosecutor Kwon isn’t having a good time with the investigation and Se-kwang tells him about Cha-don’s attempt to trick them. They decide to make the truck driver turn himself in to the police to avoid more problems later. 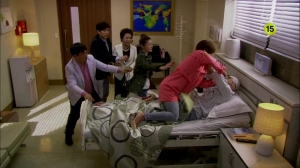 Jae-in finally finds out about Cha-don’s real condition, but the truck driver has been brought over to meet Cha-don at the hospital. Cha-don knows that someone had paid the driver to kill him and he decides it’s better to get the man’s confession later rather than forcing him to tell them right now. 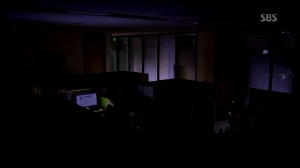 Se-kwang picks out a person from the bank as the initiator for his plan to crush Cha-don. That person, Chief Yoo, is embezzling money secretly from the back and Se-kwang makes him do a huge sum of money transfer to a nonexistent company. Chief Yoo will have a light punishment while another person is to be blamed for it later – Cha-don. Se-kwang makes the bank looks like it’s having so many customers when he’s actually planting the money to be used later. 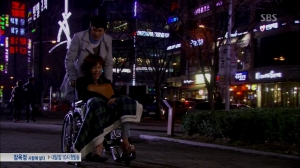 Jae-in is so happy that her bank is growing under her care and goes out for a drink with Cha-don. He comes on a wheelchair but ends up putting the drunk Jae-in on it and he’s the one pushing it. Cha-don is about to confess to her (and he’s so adorably nervous about it!) but soon realizes that she has fallen asleep. He continues talking, although she can’t hear it. 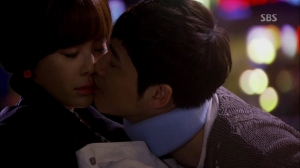 If you become my girlfriend, I won’t let you smile at another guy. I won’t let you wear sexy clothes; you’ll have to go home early at night, and I will make you look only at me. 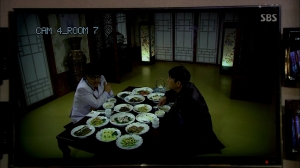 Madam Bok is worried about Jae-in getting drunk again but her focus switches when she sees Jae-in’s father at the restaurant. She gets angry at the sight of him but when she hears his conversation with Manager Yang, she softens a bit. Madam Bok also realizes that she saw him before but couldn’t remember anything about it. 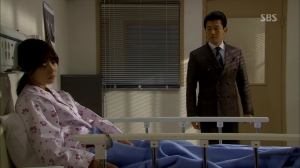 Se-kwang goes to visit Bi-ryung at the asylum, but she’s too angry to listen to any of his words. Bi-ryung doesn’t seem to believe him anymore and she refuses to believe that Cha-don is Kang-seok. Se-kwang looks a little crestfallen to see her like that and promises to come back once he finishes his deal with Cha-don. 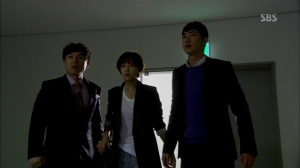 Cha-don finds out about the large sum of money transfer and Jae-in finds it weird that she never gave any approval for the loan. They soon realizes that the money has been embezzled by Chief Yoo and the bank is being investigated by the prosecutors, with Jae-in being suspected for embezzlement. Madam Bok passes out from hearing the news about it. 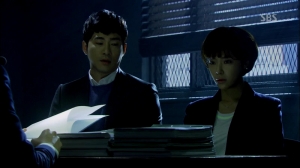 Jae-in is brought in for investigation and Se-kwang watches it with interest. Chief Yoo then comes to the room and accuses Cha-don of being the one who ordered him to transfer all the money. Cha-don is left alone in the room as Jae-in is dragged away for further investigation. Se-kwang continues to observe Cha-don. 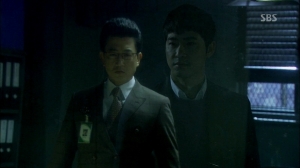 As there are nobody around them, Cha-don suggests that both of them to come out of their disguise and face each other with their real selves. He then greets Se-kwang as the older brother that he once cherished like his own family…. 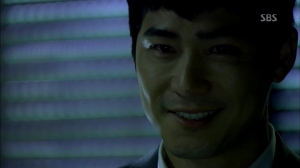 Omona! Another great cliffhanger that made me scream, thinking that it will be another six days until Saturday comes. Oh, the agony of waiting… 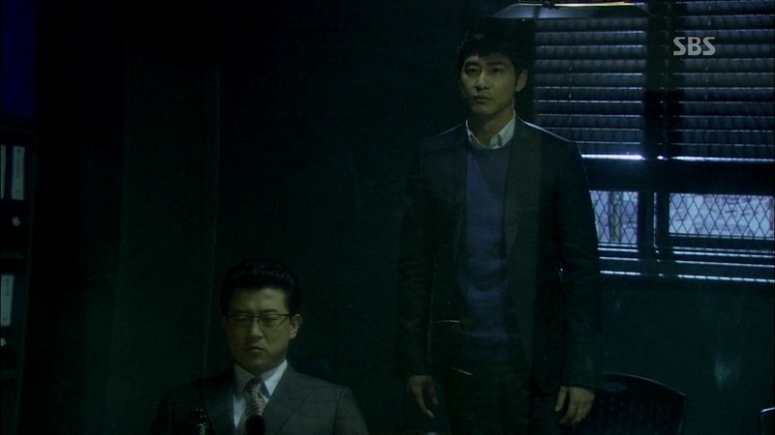 Se-kwang is always one step earlier than Cha-don, but I don’t think it’s because of his carelessness or he suddenly becomes stupid. It’s just that Se-kwang is more careful about his actions and he’s more sensitive towards Cha-don’s reaction. He’s one great man to begin with and he was just being too occupied with himself to catch up with Cha-don before. Se-kwang gets to dance in his temporary victory, but it will a matter of time until Cha-don strikes back and destroys his perfect life. 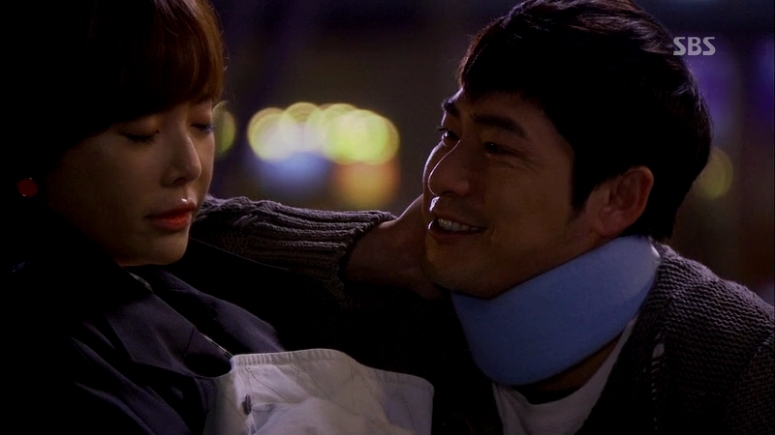 I love the cunning Cha-don but this week’s episodes showed a new side of Cha-don. He looked younger and more cheerful, probably because he’s happy to be in love with Jae-in. Eeepp! I’m all for this couple and hopefully there will be not many obstacles for their love!

2 thoughts on “[summary] The Incarnation of Money – Episode 20”