Woohoo! I never thought I’d actually watch Full House Take 2 this soon! It began airing last Monday and I just had to give it a try because of Park Ki-Woong. I totally made a right decision because he is so adorable in this drama! But soon after, I find myself amused by the hot-tempered No Min-Woo, although his makeup does freak me up a little.

I would regard Full House Take 2 as a spin-off of the 2004 drama Full House. It’s totally a new story and has no connection or whatsoever with Full House, except for the title and centered around a big house. It’s aired on SBS cable channel SBS Plus from Monday to Thursday at 12.30 PM. The format is a little different since an episode is divided into two parts and episode 1, part 1 was aired on Monday followed by part 2 on Tuesday. Each part has the duration of approximately 30 minutes.

A short introduction to the main characters in episode 1:

Jang Man-ok/ Michelle Jang (Hwang Jung-Eum) – A single woman who has been living with his grandpa since her parents’ death. She follows his steps to become a hapkido master but she’s secretly doing online clothing business behind her grandpa’s back. She’s a cheerful and friendly girl but never let herself getting bullied by others.

Lee Tae-ik (No Min-woo)  – A famous Hallyu star and member of TAKE ONE duo group. He’s hot-tempered and gets easily pissed off. He fights with Kang-hwi all the time. Behind his perfect appearance, he actually has allergy and apparently being bullied by his relative who made him a money machine for his company.

Won Kang-hwi (Park Ki-Woong) – A famous Hallyu star and the other member of TAKE ONE. He’s the complete opposite of Tae-ik: kind and friendly. He loves fashion and dresses really well but his status doesn’t stop him from buying his favorite clothes online using the pseudonym Na-nim.

Here’s a short summary of what happened in Episode 1~ 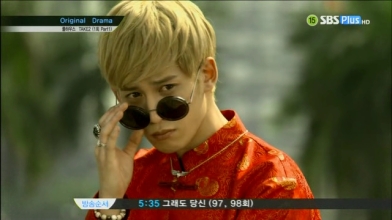 Little Jang Michelle met her grandpa who owned a hapkido school and got her posh name changed to an old-fashioned name Jang Man-ok. After some time, they went to meet grandpa’s student who happened to be Lee Tae-ik’s parents. Man-ok and Tae-ik’s first meeting didn’t end up well. Tae-ik grew up to be a singer and formed a duo group with Won Kang-hwi. They’re always fighting for everything and Kang-hwi ditched the concert after another argument with Tae-ik. Man-ok made the hapkido school into a half school- half clothing shop after grandpa left for 3 months. Tae-ik decided to do the concert alone but had difficulty in breathing on the stage and collapsed. Kang-hwi, who was also there, saved the day and kissed him in front of the fans.

Tae-ik was mad after the incident and wanted to leave the group, but wasn’t allowed by the president, who’s also his evil relative. He fired his stylist for giving him the scarf but soon realized that Kang-hwi actually helped him by removing the scarf when he kissed him. Man-ok went shopping for a mannequin for her shop and had her encounter with Kang-hwi. Later, she met Tae-ik on her way home and he ‘kidnapped’ her scooter to rush to his recording place, breaking her mannequin’s arm in the process. Kang-hwi was late to the recording and deemed irresponsible by Tae-ik; however when Kang-hwi insisted continuing the recording although he’s injured, Tae-ik was taken aback. Kang-hwi got his package from an online shop thrown away by Tae-ik and he contacted the online shop owner, who’s no other than Man-ok. Looks like it’s a bad day when Tae-ik’s arm was dislocated during his filming with a boy and he was brought to see the boy’s hapkido master, who turned out to be Man-ok.

I love how the plot moves quite fast and I’m drawn into getting to know more about the characters. They are not that complicated but still hide some sides apart from their primary personality. For instance, Tae-ik. He might seem to be complicated but he’s actually kind at  heart. I went “Awwwww” at him when he packed some ice for Kang-hwi to show his gratitude but unfortunately, he overheard him talking bad about him. Well, he actually deserved that for his bad attitude towards Kang-hwi all this while. If only these two can sit down and have a good talk, the world will be a happier place for them to live in.

I’m so happy to see some of the familiar faces: Man-ok’s grandpa was the teacher in Baker King Kim Tak Gu; the boy who played with Tae-ik was Ding Dong in The Greatest Love; not forgetting that little Man-ok and Tae-ik were in Horse Doctor as Yongdal and Gwanghyun.

With that, I’m hoping that this drama will keep me entertained. It’s healthy to have some dose of fluffy drama like this once in a while. I think it can be my stress reliever at work since it’s short and I won’t need to spend a long time just to watch it. Win-win situation.

*Also, I just realized (after watching the first part for three times!) that TAKE ONE is actually taken from both Tae-ik and Kang-hwi’s name: 테이크 원 (TAKE ONE) = 태익 (Tae-ik) + 원 (Won – Kang-hwi’s surname). Man-ok’s online clothing brand, on the other hand, is a word play of mannequin (마네킹) by combining her name into the word, producing “Manokine” (미노기네).