You know you’re addicted to something when you can’t stop thinking about it. Blood trails and murders, investigations and corpses; this is not for the fainthearted people. There’s a reason why the drama was slated for midnight slot. Am I addicted to it? For the current time, yes! I’m proud to chance upon this drama and until now, I can’t stop watching it till the end. I’m writing this as I’m watching/downloading the episodes of Special Affairs Team TEN and somehow, I am grateful for the chance!

It’s so good! As the synopsis suggests, it’s about a crime and investigation unit consists of four people, brought together by cases and fate. Don’t worry, they’re not random people; they’re all police officers. Sort of Korean CSI, but I think it’s better. I’m not someone who can write without spoilers, so I should warn beforehand that this post afterwards is full of spoilers.

Episode 1 – Tape Murder Case: I can say that the episode is one of the most enjoyable two hours I’ve ever had. I should warn those who want to watch this beforehand as this isn’t an enjoyable  ride at all. Be prepared to think until your brain wants to explode as that’s what I felt. Don’t stop and keep watching; you’ll find some invaluable lessons at the end of the episode.

The first half introduces the main quartet: ‘Monster’ Yeo Ji-Hoon (Joo Sang-Wook), ‘White Snake’ Baek Do-Shik (Kim Sang-Ho), ‘Lie Detector’ Nam Ye-Ri (Jo An), and…’Office Boy’ Park Min-Ho (Choi Woo-Shik). Well..I started watching because I don’t have the feeling to watch any other drama and I wanted to see Choi Woo-Shik. I know I’m being shallow, but I had never regret it because this shallow side of me always brought me into great shows 🙂 Back to the drama, it can be considered as a fated meeting between the four of them. After working together for the first time, they form the TEN team.

Of course, the power to pick the team members is in the monster’s hands as he’s the team leader. 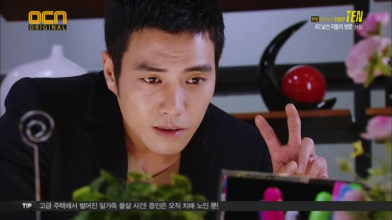 The monster is indeed a real monster in the world of crime investigation. Once a detective and now the police academy lecturer, Prof. Yeo Ji-Hoon is back into the crime scenes when the Tape Murder Case from seven years ago is making its comeback in a more aggressive manner. The case remained unsolved, but he manages to prove that the recent crime isn’t a perfect one like the case seven years ago. 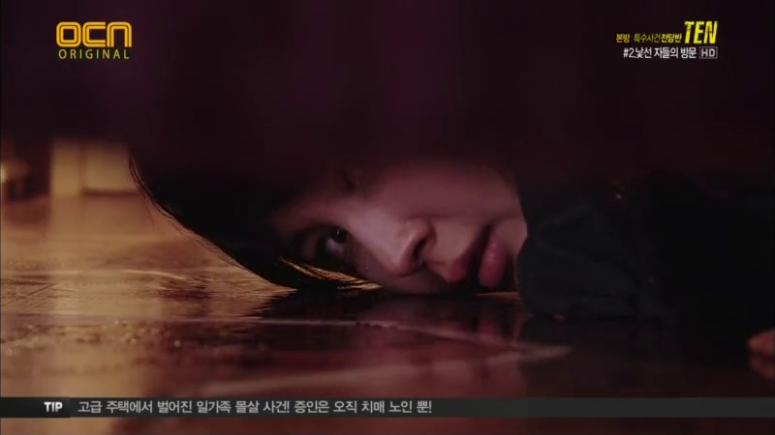 Episode 2 – A Stranger’s Visit: I think it’s just me, but I feel like this homicide episode is quite toned down. Probably they are trying to give my brain some rest after the mind-boggling first episode. No matter how toned down the episode might be, there are still splashes and pools of blood. Well..you can’t surely avoid that kind of crime scene when you’ve got several people being murdered in their own house. Not a big twist, but I’m still liking this one.

Episode 3 – Mimosa (a.k.a Don’t Touch Me): Homicide and Assisted Suicides. What starts out as a case with a detective being the victim in a murder takes another turn when it is linked to several suicide and possible drug abuse cases. This episode deals with people who are so driven towards their death but they’re comforted beforehand by someone who will wait for them at the ‘door’, welcoming them to the afterlife.

TEN doesn’t really divulge into the personal lives of our detectives, but this episode shows me another side of the white snake. The murdered detective is actually Detective Baek Do-Shik’s junior and it shakes him to his core when he’s not able to solve the mystery in a short time, even with his undying intuition he possesses. The emotion almost overpowers him but after all, he still got his venomous fangs, even if he’s to sacrifice himself.

Episode 4 – Queen: The queen who has the absolute power to everything gets murdered in her posh mansion. It turns out that her life achievement isn’t that great. Being a queen she is, she is someone who’s using her authority to gain control over people. Forgive me, but I totally don’t mind when she got killed. She’s destroyed so many people’s lives already and for once, I think the host Kim Sun-Woo did a wise choice. But then..murder isn’t the only thing to resolve the problem, remember that! ^^v

Aigoo..what am I doing? I’m supposed to write about this drama -..-” But my opinion can also be counted in…right? 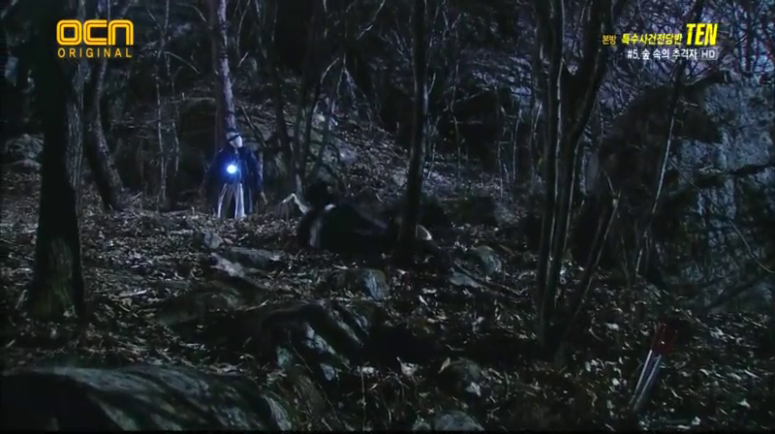 Episode 5 – Chaser of the Forest: One of my favorite episodes! Am I addicted to murders and blood by now? Gruesome. I also think like that at first and the murderer isn’t just someone who likes to hunt but ‘hunt’ might be the most appropriate word for him after the explanation comes after. Pretty touching :’) Episode 6 & 7 – Min Chae-Won’s Kidnapping: The power of mother’s love…or not? As the picture above suggests, it’s a race against time to save the kidnapped child. Even the team members themselves are frustrated at a point where they cannot find any further clue that can lead them to the kidnapper. Detective Baek’s words totally make sense as kidnap is totally different from murder: the victim is probably alive and his life is on the line, inching nearer towards danger as the time passes.

Nam Ye-Ri’s lie detector self is tested in these episodes. As she’s the psychological person of the team, she’s the one to determine whether to believe someone or not during the investigation. Believe it or not, she can do that. She’s put into confusion when she misses her target, but just like the team leader says: human beings can have so many layers of masks when they need them.

Episode 8 – Final Episode, Part 1: Déjà vu? Both on my and Team Leader Yeo’s side. The tape murder case is here again and if you’ve watched the first episode, then you’ll know why. But somehow, it feels like a déjà vu. Especially when the team leader is busy collecting himself and the others are searching for clues before finding out that they were once drawn together by the fate, seven years ago.

This is the point where their pasts are revealed, giving me clearer understanding on their characters: why Min-Ho and Ye-Ri decided to be detectives and how Detective Baek and Team Leader Yeo were looking at the same case. 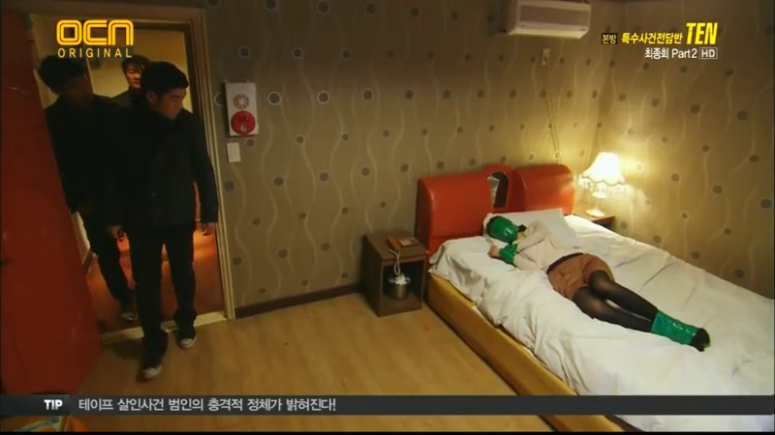 Episode 9 – Final Episode, Part 2: Moving into the current case, but more of Team Leader Yeo’s past got revealed. The monster was once an arrogant detective who’s willing to do anything to solve the case in his hand. That surely affected him when his perfect plan went awry and took away someone’s life. Coincidence or planned? Only the real murderer knows.

Just as I thought the team is going to be dissolved and it’s going to be the end for all of them, they decide to start anew secretly. A secret investigation unit? Way better. With the revelation of Team Leader Yeo’s history, the ending brings them to where all of it started off..the place in the trailer. Brilliant! And….don’t worry, there will be a second season! Yippee~

In the course of 48 hours, this drama made my head spin, my heart pound, my tears flow, and my eyes tired. But it’s an enjoyable ride, full of questions and riddles waiting to be solved by the team. I was intrigued and tried to guess who were the killers, but most of the time my intuition failed. Maybe I’m not destined to be a detective. Haha. Anyway, this is a recommended watch for those who love this genre: crime and thriller, but it’s also for those who are brave to try something new. A drama that has its appeal not on the characters, but on the cases and the investigation processes.

Oh, have some ear candy from TEN OST 1: Mad Soul Child – Breath. The MV contains some spoilers for the long first episode 🙂

I’m not a fan of blood before this, but I think I can stand it after this. Phew. Maybe..I should watch Vampire Prosecutor soon?