Forget leads with daddy issues, because this season is for drama daddies with their own issues! Fathers are no longer background characters in dramas because they are more fleshed out now, sometimes possessing threats to the leads, who are no other than their own offspring. There are fathers who are not afraid to risk their own lives in order to protect their family and others who are willing to kill for their children, but there are also fathers who put themselves above everything, even their own children.

One of the dramas I am watching right now is Bad Guys, a delightful surprise that come in the form of four mad dogs, wearing human suits. They are slowly growing on me: both the plot and the characters, although the criminals are giving me inner turmoils. As one of them said: “Hate the deed, not the man,” I’m going to settle down with that for now, but I want to focus on the leader of these bad guys: Oh Goo-tak, a jaded police officer.

He appears to be an officer with disciplinary issues, but episode 3 gives a glimpse into this man who is portrayed as a violent policeman: he was a loving father, whose world revolved around his only daughter. He doted on her and lived like the happiest person in the world, even if he only had her treasured child. His big dreams for the daughter shattered when she was murdered and his whole world turned dark. I have an inkling that he wasn’t originally violent and he started using violence as an outlet to release his anger on the murderer of his daughter.

The case in episode 3 seems to be close to his heart. Although he barely shows any reaction, always keeping his cool facade on display, the flashbacks of the happy memories he had with his daughter suggest that deep down, he is affected. He guides the team without showing his emotion, but his action does speak louder than his words (although he is a man of words). He himself said that hope is a drug, but he allows himself to have a glint of hope that the victim is still alive, waiting for the team to find her.

When they actually find the place where the lady who is kidnapped and she is about to be slaughtered, they think that she is dead and Woong-chul hits the criminal. Goo-tak barely moves, letting the fact that the lady is already dead sinking in..and he points the gun at the criminal, ready to shoot him to death. I won’t mind if he kills that despicable man. but nothing can beat the relief felt by the team when the lady stirs awake, being passed out because of the wound on her head. 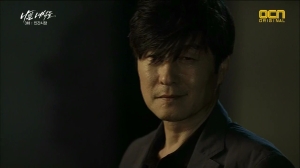 The other guys don’t know how it is to be a father and their reactions are mainly about being grateful that the lady is still alive. But Goo-tak knows the pain of losing his own child, and I can’t describe the avalanche of emotions stirring in me when he witnesses the lady and her father. A very short but memorable scene, because he can never experience it, but with his effort, he can make it possible for other people to find a second chance instead of ending up like him. His assuring smile directed at the lady is very warm and I really hope he can find another chance at life, even without his daughter by his side.

It’s a different case in Secret Door, where most of the fathers are using their own children as leverage in their political games. When I started watching the series, I thought that Yeongjo was simply a crazy king and a force to be reckoned, and after 10 episodes, I can safely assume that he is more interested in saving his own skin, or to be exact, his position as a king. It can’t be denied that he does love his son Yi Seon and takes good care of him, but he puts his own position above everything else, even Yi Seon. 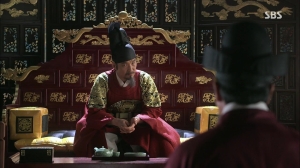 So far, Yeongjo saves his son’s life in several occasions, but realizing that Seon is actually pursuing something that might jeopardize his position, Yeongjo does not hesitate to use him against his advisor (whom he thinks is trying to go against him by using the prince) while utilizing the chance to serve as a reminder for Seon. It is scary when he does everything in ensuring that his secret stays intact, but it is terrifying that he is able to make everything move in the direction he wants, without Seon realizing about it. He knows what his son is doing behind his back, yet he acts like he’s the most supportive father in the world and lies on his son’s face.

It’s not that I hate the king, but I am more terrified of him. Since we are already spoiled by the history, even if the drama is going to make Yi Seon a victim of political discords, I can see how Yeongjo will be the one who send his own son into the arms of the Grim Reaper. I am sure that once he feels that his position is threatened and he finds a substitute to replace Yi Seon, he won’t hesitate to get rid of him.

The recent episodes are decent in terms of mirroring the relationship between Yi Seon and Yeongjo in Kim Moo and Kim Taek. Kim Taek might seem to be a better father figure compared to Yeongjo at first, but he resembles the king a lot. He is willing to do anything his own greater good, even sacrificing his own son. What is even heartbreaking is that the son knows it all, but he still choose to sacrifice himself for his father. I am curious on how Kim Taek will react if he knows that Kim Moo can see right through him, but I am pretty sure that he will still go through with his wicked plan.

At this point, Seon is still rummaging in the dark regarding his father’s true colours and it is worth anticipating how his acceptance will be. Will he turn out as calm as Kim Moo, or will he experience a breakdown? What will Yeongjo do then? Is he going to be wearing his guilty mask, or is he going to be defensive about his decision, insisting that it was for the greater good? I vote for the latter for both of them.

Besides the two pairings above, there are actually several other parent and child pairings portrayed in the drama. Minister Min, unlike Kim Taek, chooses not to include his son in his shady business. Maybe because of the son’s tendency to lean against unjust treatment, which is literally everywhere in the business, but he is protecting his son for the meantime, rather than letting him join the dark side. The son, Officer Min, seems like he’s made for the good side, so it can be another finding to look forward to when he realizes that his father is not as clean as he thought…

Maybe because of the difficult childhood he experienced himself, Seon is very protective of his own young son Yi San. When Princess Hyegyeong made the boy kneel beside her in the cold night outside, Seon pleads for her not to do it again since he doesn’t want to see his son experiencing the hardships so early, just like him. Both of them are in different positions: Seon was already a Crown Prince when he was San’s age while San has not been invested as a formal prince yet, so their responsibilities they had were different. But then, Seon was affected by Yeongjo’s action when the king was in political discords with his ministers and no one knew what he would have felt deep inside his heart.

If Yeongjo is acting out of his protective instincts, Injo in Three Musketeers is more on the insecure side. He has every reason to be so: enthroned by the ministers after a revolt, living his life under scrutiny of the ministers, and suffering the aftereffects of the war, not to mention that another war is just around the corner. Those are probably why he is easily swayed by anyone’s words and he tends to believe people so easily. It can be an advantage for Crown Prince Sohyeon to carry out his deals with Yeonggoldae in secrecy, but it is another problem when Kim Ja-jeom is fully utilizing the king’s soft heart to achieve his own dreams.

Last week’s episode is a close call for the characters and they are indeed very, very lucky that their individual actions save their lives. With the king surrounded by people who are trying to manipulate his heart, Kim Ja-jeom is like a twisted director who can produce a good show just from simple tweaks here and there. It’s like watching a chain reaction and everything falls perfectly into the picture, creating a story that can shake the whole country. It will be worse later when he gets a higher position in the court and gains the king’s ultimate trust, since it will be a matter of time before he start whispering slanders into Injo’s ears. As Prince Sohyeon is not going to stay beside him, it is a possible thing that the situation leads to his death after he returns to his country.

Dramas are more into daddies with issues rather than leads with daddy issues nowadays. We used to watch fathers being portrayed as the one who causes his children problems because of his debts with loan sharks but that was a cliche role of them. Their issues are bigger and their stakes are higher, and most of the time, these daddies can affect the lives of their children, either for the better or for the worse.

One thought on “Daddies Have Issues Too!”