Money is one scary thing. It has the power to do anything: from buying love to tempting someone into doing something impossible, not to mention bringing people together before tearing them apart. This episode shows how money plays the important thing in the characters’ life and the changes it bring to them, either good or bad. 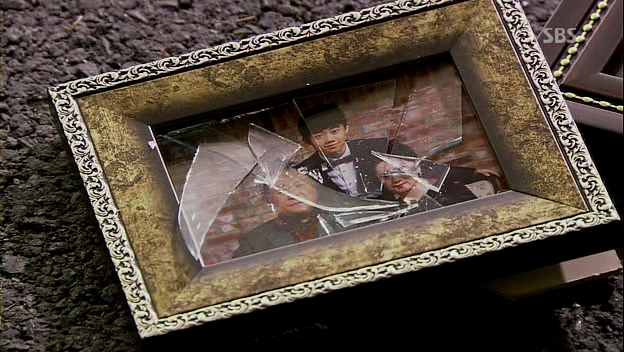 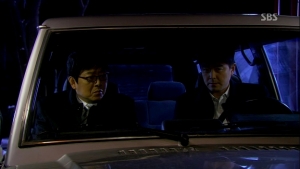 As expected, Madam Park was deemed not guilty and free from the murder attempt charge. Kang-seok and his mother rejoiced with happiness with the verdict but it’s not the same for Prosecutor Kwon. The family finally decided to remove the ventilator, putting Chairman Lee’s life to an end. Se-kwang didn’t wait too long to give the tape with Madam Park’s voice to the prosecutor and the prosecutor chose to wait for the autopsy result to be out before making his move. Kang-seok and Madam Park were sad over the death of Chairman Lee and the prosecutors dropped over to offer their words of condolences. Kang-seok told Prosecutor Kwon about what he heard from the reporters before: Eun Bi-ryung had another lover. The autopsy was carried out and the cause of Chairman Lee’s death was confirmed to be the poison found in the herbal medicine.

The will of Chairman Lee was going to be announced, hence the family members were treating Madam Park nicely to get into her good books. Bi-ryung also came to the reading of the will by Attorney Hwang and the whole asset went to no other than Eun Bi-ryung. Madam Park and Kang-seok were shocked over the revelation but that’s not the end of the surprise; the people from prosecutor’s office came with a warrant to arrest Madam Park for causing Chairman Lee’s death. Bi-ryung reminded Kang-seok to start packing to move out of the house, which belonged to her from that moment. The family members were complaining as they didn’t get a single penny and Kang-seok told them to get out of the house. Attorney Hwang handed over some money to Kang-seok but got turned down. 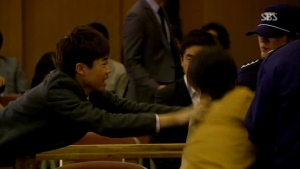 Madam Park was sure that Bi-ryung and Attorney Hwang worked together to steal away the inheritance from the family. She wanted Se-kwang to find Bi-ryung’s secret lover and he promised to do this best. The trial for the murder took place with the tape being the prime evidence, which was said to be handed over by Attorney Hwang. Se-kwang couldn’t do anything as the defense lawyer and persuaded her to admit being the murderer to make her sentence shorter, all for Kang-seok’s sake. She was announced guilty and sentenced to twelve years in the asylum because of her depression history. Kang-seok couldn’t do anything for his own mother and he received another shocking news: the house was already sold to someone else.

Kang-seok went to the broadcast station to look for the reporter who came to his house before: Reporter Go Ho (Lee Seung-hyung). He told the reporter about the thing happened to his family and asked whether her knew about Bi-ryung’s secret lover. Reporter Go remembered being caught by Se-kwang when he was taking Bi-ryung’s photos. He promised to find out about it from Bi-ryung and told Kang-seok to contact him should he got any new info.

Kang-seok visited his mother at the prison and lied about living happily in their house, but she knew that the house had already went to someone else’s hand. He vowed to seek the truth for his mother. Madam Park told him to stay with his uncle or aunt for the time being, but his presence was not welcomed because Chairman Lee didn’t treat his siblings well when he was alive. He left and wandered on the streets alone.

Reporter Go went to find Bi-ryung and met Se-kwang, who was there to fetch Bi-ryung. Se-kwang invited him for a drink and they talked about something. Kang-seok didn’t have any other place to go and decided to go to Se-kwang’s house. No one answered the door, so he had to wait outside in the cold. He brought out the picture of his family taken from the house earlier and fell asleep in front of the door. Kang-seok dreamed about his father.

In the dream, he remembered about the time when Chairman Lee brought him to a place in the middle of the night. The place was the home to a ginormous sum of money and other valuable things, where Chairman Lee hid the money. He gave Kang-seok the gold coin with a reminder that money is something worse than a ghost. Kang-seok cried and Se-kwang, who came home, woke him up from the dream.

While he’s filling his stomach with the food, Kang-seok told Se-kwang about his meeting with Reporter Go with excitement. He’s confident to be able to catch the bad guys soon. Se-kwang received a call from Attorney Hwang, who’s curious about his meeting with Reporter Go and Kang-seok’s whereabouts. He went outside and Kang-seok accidentally dropped Se-kwang’s diary while he’s trying to take the tissue. He saw a picture inside the diary and pulled it out; it’s a picture of Se-kwang and Bi-ryung together. Kang-seok was so shocked and put the picture inside his pocket. The telephone rang and Kang-seok was even more shocked that the caller was Bi-ryung. 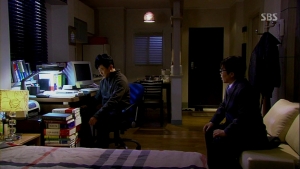 Se-kwang went inside but Kang-seok was nowhere to be found. When Bi-ryung called again, he realized that Kang-seok already knew the truth about him being Bi-ryung’s lover. He ran after him but Kang-seok was faster and he managed to escape. He called Reporter Go to tell him about Se-kwang. Reporter Go promised to fetch him but he actually told Se-kwang about Kang-seok’s location. Se-kwang decided to kill Kang-seok to make sure that the secret would be buried forever.

Kang-seok was surprised that it’s Se-kwang who came to him, not Reporter Go.  The bad guy came with several men and chased after him; luckily he managed to escape again. Se-kwang visited Madam Park and promised to take care of Kang-seok, while he’s actually waiting for the kid to come to the prison in order to catch him. 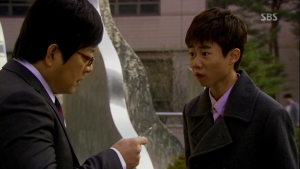 The clueless boy was happy with the outcome and wanted to become a prosecutor just like Prosecutor Kwon, so that he would be able to catch all the criminals. The prosecutor soon got worked up over Kang-seok’s comment and stated that the prosecutors wasn’t as simple as he thought it’d be. He told Kang-seok to get out of his car and left him at a construction site. Suddenly, a car started chasing after him and Kang-seok didn’t have any option but to run for his life. 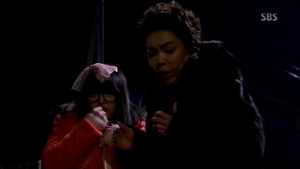 Bok Hwa-sul (Kim Soo-mi) was chiding his chubby daughter Bok Jae-in (Seo Shin-ae), who kept eating all the time. The argument got bigger when Jae-in insisted on turning on the radio, interrupting the driver’s attention on the road. Kang-seok was still running from the car and he got hit by Madam Bok’s car. The driver told them to run away but she decided to take him to the hospital. The car chasing him earlier was driven by Se-kwang’s men and they quickly left the place. 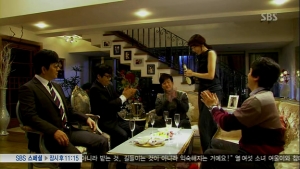 Kang-seok had to undergo an operation as Jae-in waited with her mother while munching on her snack. The driver couldn’t find any identification document with Kang-seok and they didn’t have any way to contact his parents. Meanwhile, Bi-ryung, Se-kwang, and Attorney Hwang were celebrating their success after getting rid of Kang-seok with Prosecutor Kwon and Reporter Go. They divided the inheritance among them, with each of them getting USD 7,400,000. They were about to fight over the amount of money received but Se-kwang told them to stop arguing. 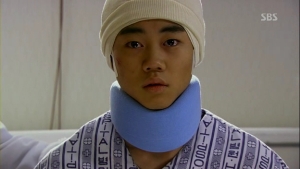 The doctor treating Kang-seok told the result of his operation – his brain was injured and he’d experience some memory loss. The driver went into the office to tell them that Kang-seok had regain consciousness. He stared blankly into Jae-in’s face, who’s busy adoring his handsome face. The doctor came into the ward and asked him to say something. Madam Bok kept telling him to tell her about his family, but tears soon rolled down his cheeks and the only word he said was,”Mother.”

My guess was wrong; we’ll have to wait until next Saturday to see the adult cast. I can’t wait to see them! The preview makes me even more impatient and looks like I’ll have to keep on replaying it for a while.

Money is indeed a thing scarier than ghosts. It can be the god to those who worship it but it can also bring the disaster to those who own it. It’s the end for the Lee household because of money, although they were wealthy for the start. Money can’t really buy happiness, but sometimes it can buy other things such as loyalty and integrity, even if the people have to go against their usual ways just because of money. True, it’s impossible to see someone saying “no” when he’s offered money. Will Kang-seok be the pure boy he is, or is he going to change just like those people? We’ll see.

7 thoughts on “[summary] The Incarnation of Money – Episode 2”