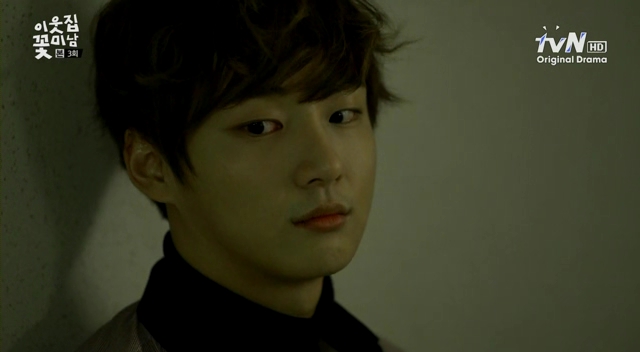 The more I watch the drama, the more I come to like the characters. They aren’t the people that we will never encounter in our life; instead, the feelings they have are very close to my heart. The little jolt of happiness and the pang of sadness hitting their hearts…I can relate to those. It proves that the drama, although not that fast in development, shows us how the characters will grow up throughout the course of the series. For that, I am happy to say that if it continue to be like this, the drama will hold a special place in my heart for a long, long time.

I can feel Dok-mi’s nervousness to meet the person she’s been crushing over for months in front of her eyes instead of looking at him from her window. It’s simple but truly remarkable for her: she gets to know his name and she gets to show to him that she’s there, living on the same world as him. Ah, the happiness. However, that doesn’t last for too long when Seo-young arrives and the atmosphere turns a little awkward for all of them. I am glad that Dok-mi gets to experience a moment of happiness, to be alive and actually be there in front of her crush, even if he doesn’t even know her feelings. How happy I am when she manages to introduce her name even after a few stutters. That is something to be proud of the timid Dok-mi.

Enrique (or Kke-geum, as he’s called by Seo-young and Tae-joon) is just as fragile as a boy. He tries so hard to maintain a straight face and play cupid to his first love and his cousin while he’s actually crying inside. Beneath his chirpy attitude, his super talkative mode, his cheerful self, he’s someone who’s faithful but not selfish. When he and Dok-mi steal glances towards Seo-young and Tae-joon respectively, it’s just sad. But unlike a boy who will throw tantrums if he can’t get what he wants, he’s far more matured than that. He wishes the best for  those two and proudly announces that his first love of ten years has ended. While someone who just get dumped will go for a drink, he chooses to play games at the internet cafe and sheds some tears. Oh boy, let me give you a hug.

Another heart owner that should be mentioned is Jin-rak. He’s totally falling for Dok-mi, in the sense of the desire to take care of her for the time being. It’s funny how he’s stalking Dok-mi and Enrique unintentionally but somehow a disappointment when Dok-mi is totally oblivious of him, even when they’re in the elevator. He’s the one who first met Dok-mi, but unfortunately, he’s not going to be more than an ahjusshi next door for her. He’s trying to help Dok-mi to stay in her comfort zone, but Enrique is the one who forces her to open her door and embrace her fear of the outside world. While he will make her life comfortable, it won’t help her at all. But then, he’s brave to stop Enrique and Dok-mi, symbolically stopping them from going further from him. Although that’s still a mystery on why he did it  and we will have to wait for tonight.

The first step for Dok-mi to go out of her shell is already taken: she begins to care more about the people around her rather than ignoring and closing her eyes. She worries about Enrique and even helps Jin-rak with his rent. It’s small gestures but it takes a baby step for a journey to start. I can’t wait to see her letting go of her painful past and finally enjoying her life outside. 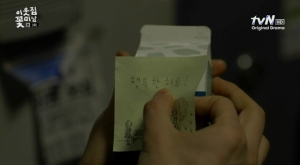 And…who’s the mystery milk note guy? I’m curious, but I think I know who it is 😉