This episode won’t be as calm and blissful as the episodes before this since we are jumping into the second half of the drama. It’s hard to see our adorable characters being hurt by people around them, but it’s the point where they have to make their choices for themselves. 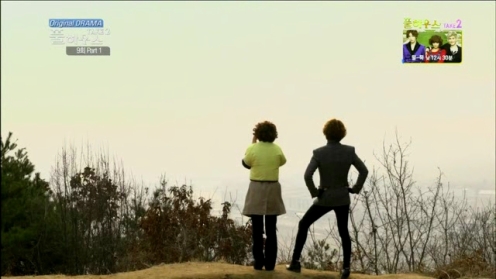 Here’s the summary for Episode 9!

Man-ok quickly retreated from the scene as Tae-ik looked at her walking away. He would better be regarded as gay rather than reconcile with Se-ryung, but Se-ryung knew that his engagement with Man-ok was just a show. She vowed to get rid of anything that might hinder her relationship with him. Man-ok kept thinking about what she saw earlier outside and suddenly, Tae-ik came out and handed her a sweater as it’s cold. They went in together as Se-ryung began plotting her evil plan. She handed the pictures of Tae-ik and Man-ok to a reporter and after Tae-ik refused to have a meal with her, she told the reporter to reveal everything about them. Tae-ik got furious with Se-ryung’s attitude and left the company, but Man-ok managed to go with him.

He looked at some couples and thought whether they should go for a proper date. So off they go to do everything like what they did during the couple photo shoot: hiking and cycling at a park. People recognized them and Tae-ik chose to ignore everything as he and Man-ok were engaged. The news about their fake engagement was spread as Man-ok and Tae-ik were enjoying their secret date. They even held hands at the cafe, clearly oblivious about what’s going on. The fans who found out about the news saw Man-ok at the cafe and attacked her while Tae-ik was busy giving signs to his fans. He received a call from Go-dong, who told him about the news. He saw the commotion outside and saw Man-ok being hit by his fans. He pushed them away and scolded her because she didn’t even protect herself, but suddenly one of the fans fainted. Luckily the fan was alright and they went home.

Tae-ik felt guilty for causing Man-ok to be assaulted, but suddenly, LJ stormed into his room and started to scold him. He wanted Tae-ik to tell the public that Man-ok forced him into the engagement, but Tae-ik didn’t want to use her to save himself. Kang-hwi got to know about it from Se-ryung and went to see Tae-ik. Kang-hwi vowed not to let Tae-ik go if he hurt Man-ok. Meanwhile, Man-ok, who overheard LJ and Tae-ik’s conversation before, tried to act like nothing happened. Kang-hwi asked her to accompany him to have his cast removed. While they were at the hospital, Man-ok got a call from Go-dong, saying that Tae-ik was nowhere to be found…

As everyone was still searching for him, TI actually went to see his father at the memorial place. He remembered about the first time he came to Full House, the house that his father gave as a present to him and his mother. He apologized in tears to his father. Tae-ik thought about what happened to Man-ok as he sat alone in his car. LJ was about to apologize for his absence at the press conference when Tae-ik made his appearance. He admitted that the news was true and he’s going to take responsibility, hence announcing his departure from U Entertainment. LJ asked whether he’s really going to give up on Full House, but Tae-ik was more than willing to do so. Man-ok went to the press conference place but it already ended. Man-ok, still worrying about Tae-ik decided to go home. LJ saw Kang-hwi and greeted him warmly. He tried to ask Kang-hwi to go back to U Entertainment, but Kang-hwi won’t bude after what happened to Tae-ik. LJ told him about his eye problem and Kang-hwi was shaken to learn about the diagnosis. He still refused to follow LJ’s wish and left. At the same time, Man-ok missed Tae-ik by a split second as he already left Full House.

Manager Hwang learned about the news and went to meet LJ. LJ didn’t even want to hear any of his words and threatened to fire him, but he’s more than willing to leave someone as greedy as him. Before he left, Manager Hwang warned LJ that someone like him won’t last forever in the business with his attitude. LJ told Se-ryung that Tae-ik made the decision to give up everything because of Man-ok but she found it hard to believe. He wondered who was the culprit that told the press about the fake engagement and Se-ryung looked a little nervous. Kang-hwi went drinking alone after learning about his eye problem. He kept assuring himself that he’s fine, although his visit to the doctor earlier didn’t turned out to be well. He walked out tipsily and saw TAKE ONE’s performance was shown on the television outside a shop. He started singing along to the song ‘Touch’ and didn’t stop although people kept staring at him. He eventually broke down and cried as he sang. 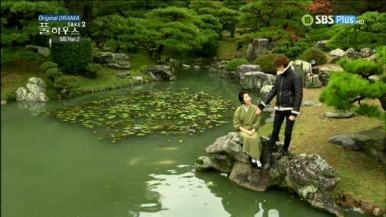 Neither Man-ok nor Manager Hwang had any idea about Tae-ik’s whereabouts, but Manager Hwang finally managed to find him. He already arrived in Japan and went straight to a guest house to see his mom. She kept asking about his dead father and it turned out that she lost her memories after his father’s death. Tae-ik walked around and the place reminded him of the day he brought his mom there to put her under his aunt’s care. He met some fans and they started to surround him, asking for autographs and taking his pictures. His mom mistook them as the people who came to take Full House away from them and he went to comfort him. The fans started to take her pictures and Tae-ik screamed at them, telling them to stop doing so. She eventually returned to her usual self and they went back to the guest house. Tae-ik was surprised to see Manager Hwang ushering people into the place and Man-ok suddenly came out. She smiled with relief to see him while he’s too dumbfounded to see her there..

My hand was shaking as I typed part 1 and my eyes were brimming with tears when I watched part 2. Who would’ve thought that a drama that was full of laughter in the first 8 episodes managed to make me cry? I really hate to see Tae-ik and Man-ok being separated in the midst of their happy time. Luckily they were together again in no time! It’s sad to see Tae-ik being so upset to give up on Full House for Man-ok’s sake, but it’s sadder to see him trying to be happy in front of his mother. I cried when his mom turned out to have lost part of her memories and he had to act like nothing happened for her. Poor boy.

My heart also broke for Kang-hwi. The scene where he broke down while singing to Touch made me stop watching for a while; it’s too much for me to continue. Wasn’t it too much for a guy like him? I just couldn’t bear to see the cheerful him getting all emotional because of his illness. He would eventually join LJ again as he promised to help him, but is it going to be an empty promise? We’ll see. I don’t want to see Kang-hwi hurt again, but he will be soon, because of his affection towards Man-ok.

Tae-ik’s decision to give up on his lifelong goal, which is Full House, proved that he’s serious about Man-ok. I was afraid that he would be swayed once Se-ryung returned, but he didn’t. I guess we got something to be thankful of for the exceptional haughty attitude of Se-ryung because it helped to push Tae-ik further from her. For now I can be rest assured that she won’t be that much of a threat to Tae-ik and Man-ok’s relationship. Yeay!

Deep down, I just want to see Tae-ik and Kang-hwi again, together on the same stage under the name of TAKE ONE. I miss the bromance.