The main characters: King Sejong, Ddol-Bok/Chae-Yoon, and So-Yi are all trapped inside the entangled complex of their own. Sejong once felt inferior towards his father, Chae-Yoon is still living solely for his father’s revenge, and So-Yi probably is living indebted to Sejong. The main focus of the story is about the murders, but their entwined history is quite appealing and add more mystery to the plot. 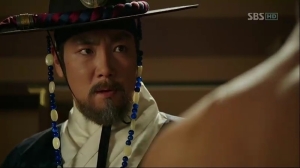 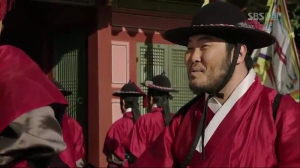 After King Sejong appointed Chae-Yoon to solve the case, Moo-Hyul, who’s not that fond about the idea of letting someone so new to the palace to take the case, goes to Sejong to voice out his earnest concern. However, Sejong instructs him to assist Chae-Yoon in the process. Then, Moo-Hyul returns to the interrogation room and he sees the scar on Chae-Yoon’s upper arm. He doesn’t ask anything and let him go, but he doesn’t let his suspicion fades away. Meanwhile, one of Chae-Yoon’s buddies from the North, Cho-Tak (Kim Ki-Bang) joins the palace guard and meets him. Moo-Hyul, who’s still weighing his suspicion, believes that the scar is from his sword. 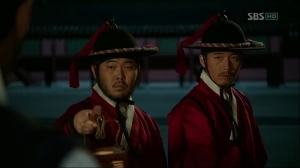 Chae-Yoon and Cho-Tak is doing their night shift near the Jip-Hyun Jeon while talking about his revenge when a scholar named Yoon-Pil (Kang Sung-Min) tries to enter the study hall. Chae-Yoon doesn’t allow him to go inside, afraid that the person will hinder his investigation from running smoothly.

The next day, the head of Chae-Yoon’s department, Officer Jung, comes running towards him, still dazed by the fact that such a childish new guard is given the order to do an investigation. He quickly appoints the other team members for the investigation team: Park Po (Shin Seung-Hwan) and Cho-Tak, whose name he remembers as ‘little bean’. They are appointed their first task: a visit to the mortuary.

Moo-Hyul and Jeong In-Ji are informed by Crown Prince Gwanpyeong (Seo Joon-Young) that King Sejong didn’t sleep a wink the night before and spent his time at the palace nursery. They hurry there and mistakenly call Sejong ‘punk’, who is busy pouring the manure water onto the flower beds. When they ask about the reason he’s doing it, Sejong complains about the officers who take their works lightly and how they’re going to show they’ve worked hard after finding out about his ‘dirty’ work. Then, the three of them go to see the workers and Sejong teases one of the court ladies, Deok-Geum (Shim So-Heon). 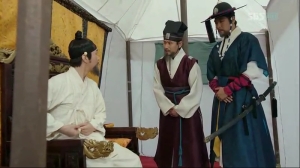 Officer Jung, together with Chae-Yoon’s little team go to Banchon and meet Do Dam-Daek, the Head Lady on the way. Afraid that she might recognize him, Chae-Yoon hides his face away from her gaze but she could sense something is up. They are actually meeting Ga Ri-On, someone that Sejong wishes to meet personally. Also, Sejong discloses to his men that Chae-Yoon is nothing more than a bait to lure their enemy out of his hiding place. His idea of using a slave to conduct an investigation doesn’t stay too well with Moo-Hyul, but Sejong insists on meeting and using his expertise. 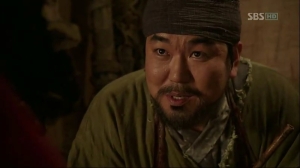 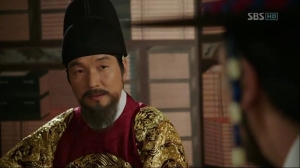 It turns out that the said Ga Ri-On (Yoon Je-Moon) is a butcher at Banchon. He is well known for his butchery skills and also the career running in his family: coroner. Chae-Yoon, still on his guard and cautious of both the butcher and his helper, is looking forward to watch his famous autopsy skill.

At the palace, Sejong further discloses his plan. He wants to use Chae-Yoon to divert their enemy’s attention from them, so that they can observe the enemy. Moo-Hyul worries about Chae-Yoon’s temper but Sejong assures him that the boy will just wander around as he can’t do anything particularly. However, Moo-Hyul isn’t that happy about it as his suspicion is arising. 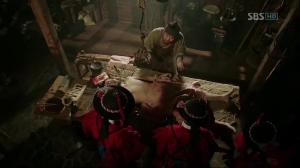 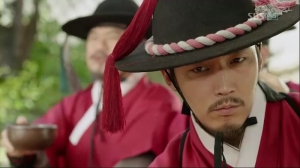 Back at the butchery, Ga Ri-On starts to tell the team about what he could observe from the scholar’s corpse: particularly nothing. He wasn’t killed by the common method such as stabbed, strangled, hit, or poisoned, as no sign could be seen on his body, except from a few blue bruises. But then, his wet clothes give Chae-Yoon a clue. He’s probably murdered using martial arts movement. The team the go for a meal but Chae-Yoon is too busy thinking about the case. He gives Do Dam-Daek a look.

Cho-Tak senses that Chae-Yoon has found out something about the case, and he spends his time thinking about the martial arts movement, who could only be used by his teacher. He then remembers his days as a soldier back in his teens.

He’s brave and strong enough to defeat an opponent bigger than him and his strength was greatly admired by General Kim Jeong-Seo. In one of his fights, an old man suddenly came and defeated all his opponents in a single blow of his sword. The old man refused to take him as his student, much to his regret. He spitted out how he’s living only to seek revenge for his father, but the old man still refused. His strong will to die as a warrior stirred something in the old man’s heart: Lee Bang-Ji (Woo Hyun).

While thinking about Chae-Yoon’s scar, Moo-Hyul is also brought into thinking about the only person that has defeated him 20 years ago. It’s the same Lee Bang-Ji, whose student is Chae-Yoon. 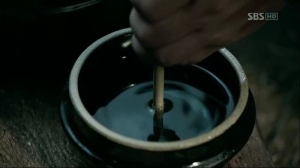 Ga Ri-On enters the palace to make his regular meat delivery and then, he’s brought over to meet Sejong. He then tells him about the matter that he found out about the scholar’s death cause, which he didn’t tell anyone about it. It’s called Geon-ik-sa-gong, a technique in assassination. Using only a drop of water to choke a person to death, it’s a very useful method to kill people without leaving any observable trace. Sejong tells Ri-On to keep it as a secret. However, Jo Mal-Saeng sees Ri-On leaving the royal kitchen and senses something is going on. 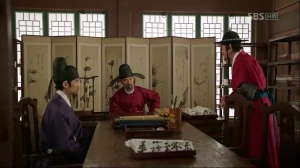 Sejong tells Jeong In-Ji to warn his scholars in secret, but Officer Jeong is already blabbering about the investigation in front of Lee Shin-Jeok and Jang Eun-Seong (Baek Seok-Bin). Minister Lee advises him to solve the case faster, but he’s not going to let the matter slip without his knowing about it and orders the report to be handed to him.

Park Paeng-Nyun (Kim Ki-Bum) is scolding the latecomer Seong Sam-Moon when the elder scholars arrive. They hold a meeting to voice out their concern about the rumors circling around about the murder, but they ditch the thought about it since Jip-Hyun Jeon is going to be opened again. One of the scholars is missing, namely Yoon-Pil. Do Dam-Baek meets with a man with unknown identity who gives her Yoon-Pil’s name. He then instructs her to execute their plan that night, together with someone called Pyung. 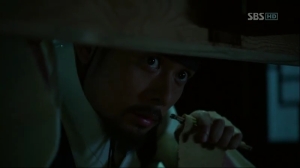 Scholar Jeong comes to meet Sejong, who is practicing some weird sounds with someone, probably a woman. When he says about a scholar that has disappeared, Sejong dashes out and tells him to find the scholar as soon as possible. The missing scholar is Yoon-Pil. In the meantime, Yoon-Pil is wandering around the murder scene in Jip-Hyun Jeon, probably searching for something and without him knowing, Chae-Yoon and Cho-Tak have also come into the hall. Yoon-Pil finds a small note under the table where the scholar has been murdered, but Chae-Yoon knows that he’s there. He’s then chased by the guards and decides to burn the note, but Chae-Yoon manages to retrieve it and he’s knocked down by Cho-Tak.

They recognize him and suddenly, an owl hoots. Then, some daggers fly down towards them from a tree and a masked man appears. He takes the unconscious Yoon-Pil along with him and jumps up to the tree using one of the movements that Chae-Yoon also masters. The guards come but he’s nowhere to be found. Sejong is informed about it and he’s not that happy about it. Moo-Hyul tries to sell his idea about his suspicion towards Chae-Yoon, but his king tells him to focus on finding Yoon-Pil and the masked intruder.

Sejong then asks an opinion from someone behind his prince: So-Yi (Shin Se-Kyung), who writes her reply on a piece of paper. Sejong says that her opinion is the same as his and burns the paper before ordering her to go to the printing office. 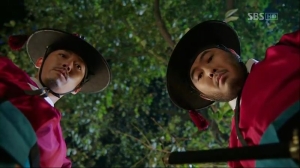 Officer Jeong and Park Po are still blaming Chae-Yoon for their sudden overnight duty. Cho-Tak and Chae-Yoon, on the other hand, are busy thinking about the masked man. Chae-Yoon reads again what’s written on the note that he took earlier. They start to trace the man’s movement around the palace and Chae-Yoon is sure he’s still stuck inside the palace because of the massive patrolling and guarding activities going around.

At the same time, So-Yi has arrived at the printing office and busy searching for something around the office. All of a sudden, a man comes behind her. Chae-Yoon also arrives at the office but the movement is no longer traceable. Cho-Tak smells something and Chae-Yoon confirms it as sulphur before the office is set ablaze in front of their eyes. Chae-Yoon knows that the man he’s searching is inside and he jumps into the burning building. 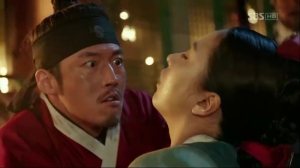 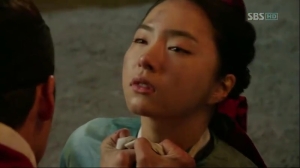 Some moments later, he walks out with So-Yi on her shoulder. Instead of trying to revive her, Chae-Yoon grabs her collar, demanding to know who the man is but no words come out from her mouth. However, his scream fells like nothing new to Moo-Hyul. He then remembers where he heard that scream and the idea finally clicks in his mind.

‘Brilliant’ is a word that I think can closely describe this drama. The pace, the acting, and the idea behind it are so captivating, at least to me and until now, it manages to grab my attention. Once I got hold of any episode, I’d watch it intently like some sort of reading for exams. If the story continues with this level of performance (but I won’t mind a better one), it’s just a matter of time before this become my sageuk of the year. 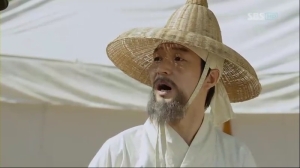 The scene at the nursery is totally a break to all the problems and turmoil going on inside the palace. Sejong himself is a fun man to be with, not just because he’s brilliant, but he has a dry sense of humour inside him. He could be charming when he wants to, but that doesn’t mean he’s someone who can be stepped on by anyone. Remember his word? “I’m the King!”

With Chae-Yoon getting nearer to him, would the man full of revenge find a chance to learn the truth and forgive him, a king full of ambition and compassion for his people?