Watching a sageuk demands more concentration than watching a modern days drama. It can be much more thrilling if you pay close attention to it and when some scenes appear, you can’t help but stay silent to hear what the people are saying. It’s like being engrossed in a chess game or a puzzle, or simply, reading a book. It’s a major distraction when someone tries to distract you, even for a brief second. 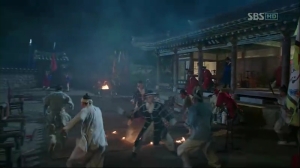 Taking off from the last episode’s ending, the servants are wailing after Seok-Sam’s death. Sejong decides to go to the prosecutor’s office. When Moo-Hyul says it’s not the best time to do so, he wonders, whether he really has to do nothing or not. It’s so meaningless to do nothing when he’s actually the King. Then, the servants make a ruckus in the prison and break out. Queen Soheon, who’s on her way to see her mother, witnesses this and leaves. Ddol-Bok and Dam-Yi tries to run with Dam-Yi’s father, but he gets stabbed to death by a guard. Ddol-Bok hits the guard and Dam-Yi runs away before she bumps into Soheon. 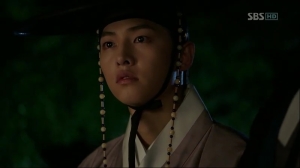 Queen Soheon hides her inside her skirt and distracts the guards away. Sejong also comes to the office and witnesses all the prisoners fighting for their lives. He recalls his Queen and father’s words when suddenly, Ddol-Bok runs into him while he’s trying to escape. Sejong asks Moo-Hyul to save Ddol-Bok from the guards. They save him but someone’s looking at them behind the shadows. 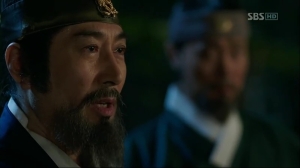 Sejong and Moo-Hyul hide him in a sack but when they turn around, his father is there. Taejong orders the guards to take away Ddol-Bok’s life, but Sejong tells them not to do so. When he tells them to obey the King’s words, Sejong gets furious and states that he’s the Joseon’s king, not the Former King. Sejong tells his father that it’s not his Joseon anymore. Taejong asks him how different his Joseon is from him, but Sejong doesn’t give any answer.

He then challenges Taejong to kill him too, because he’s the one who saves the runaway prisoner. Taejong puts the sword on his neck, but he doesn’t flinch. He then makes his last command to Moo-Hyul: to take revenge on those who kill him, the king who couldn’t do anything. To Taejong, he warns him that Moo-Hyul is Joseon’s best swordmaster. Just as Moo-Hyul and Taejong’s men, with their swords up, ready to fight, Taejong retreats, leaving his son behind. Sejong falls on his knees as soon as Taejong and his men vanish from his sight.

Taejong muses with Jo Mal-Saeng about his son’s sudden fierceness and laughs at himself for thinking that Sejong is weak. He tells Jo to gather the army with their weapons at the break of the dawn. Sejong and Moo-Hyul goes to the shack to witness Ddol-Bok questioning a guard he knocked off earlier about who killed his father. The guard tells him, it’s the King. Ddol-Bok swears to kill the King who caused all this as Sejong looks at him with teary eyes. Moo-Hyul wants to kill him to avoid future problems, but Sejong doesn’t allow him to do so.

King Sejong: He’s my people. The person whom I saved: my first citizen. The boy is right. A King has to protect his people, but how can I be the one, when everyone’s dying because of me? At least I saved him, so let him survive. Therefore, I was the king at that moment. He’s my first citizen whom I saved, and he’ll be the last whom I saved.

He admits that he actually doesn’t have any answer to his father’s question. That’s why he wishes to keep Ddol-Bok alive as a proof of the only citizen that he saved. Back to the palace, Sejong walks around and decides to stop. 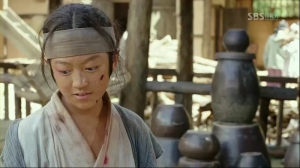 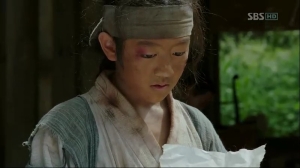 Ddol-Bok wakes up in a house in Banchon, where the servants of Sungkyunkwan (University) live. He moves around cautiously but gets comforted that the guards will not be able to enter the area without King’s consent. He walks around and gets fascinated with what the happy servants are doing: clothes, food, and even charcoal. He can’t help but recall all the memories that he has as a servant and his father. He scolds his father for leaving a will to an illiterate son like him.

Sejong learns about Taejong’s order to gather all the royal guards and begins preparing himself. Taejong orders his men to send an empty lunch box to his son. His men are utterly shocked about his action. Sejong opens the red box and reads the letter from Jung Ki-Joon, one of the people that his father killed. Queen Soheon meets him and Sejong warmly greets her. When she asks about his action, Sejong admits that he’s going to descend the throne as he’s unable to do anything. Suddenly, the lunch box arrives. 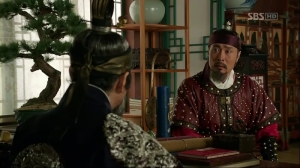 Jo Mal-Saeng tries to talk about this with Taejong, afraid that Sejong will take it the wrong way and kills himself once he received the box, like an ancient story. Taejong knows that his son is smart and he’s going to figure out the meaning behind it. Sejong, Soheon, and Lee Shin-Jeok (Ahn Suk-Hwan) stare at the box with horror and Sejong starts to think about the meaning: a suicide. 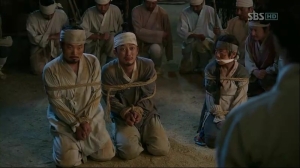 Back to Banchon, two servants are caught trying to deliver a book of Sam Bong* and gets captured. In order to avoid any threats to the area, they are to kill themselves. Ddol-Bok is brought to the scene to watch it, teaching him that he might face the same consequences if he tries to stir any problem there. He doesn’t even flinch when a man threatens to kill him. The Head Lady remembers about what Moo-Hyul said when he sent him there: make him one of your people; if you fail, kill him.

Sejong stares at the empty lunch box while the soldiers under Taejong’s command getting ready to fight. Moo-Hyul goes to meet Sejong and suggests that he beg for forgiveness from his father. While talking to Moo-Hyul, he finally gets his solution, for both the lunch box and the Magic Squares. After trying out for the simpler ones, he tries out with the largest one, and gets the correct answer, hence his answer. Sejong repeats what he heard from Ddol-Bok: “Bullshit.” He goes to meet Taejong.

He opens the door to found out that the arrows are pointing towards him. Taejong tells the soldiers to release their arrows.

Despite the threats, Sejong walks towards Taejong, unwavering in his decision.

*Sam Bong: Jeong Do-Jeon’s pen name, the Prime Minister of King Taejo, King Taejong’s father. Taejong killed him because he supported his half-brother to take the throne, feeling that he’s much more competent than others.

Sejong finally gathers up his minimal courage to go against Taejong, although he’s not that strong yet. His firm decision and words leave an impression and Taejong knows Sejong will be able to be a good King. It shows that Taejong knows his son very well and tries to wake up the potentials buried deep inside Sejong by giving him constant pressure, looking forward to what he’s going to do.

The lunch box is a very brilliant idea of King Taejong. Knowing that Sejong is a bright kid, he is not afraid to see how the things are going to happen after he sent the box to his son. He knows that if Sejong doesn’t think much, he’ll just take the road that everyone assumes him to do so: committing suicide. If that’s what Sejong is going to do, he’s not fit to be a King in Taejong’s eyes, for a leader should think more than what is being presented in front of his eyes.