2019 has already came to an end, and I have to say that it was one of the most eventful years for me: after deciding to change jobs the year before, last year started out pretty bad for me, having to work almost as tirelessly as I had to in my previous job. However, things took a better turn when I finally got an unexpected job offer in March: a normal job with normal working hours, which means a good time to get back to my drama watching! But it’s not that easy, since I had to make a daily 4-hour commute…and I was left with little time to watch. Still, it’s better than none, and I managed to get this stagnant blog up and running again, somehow.

It is nice to make plans in everything, including your drama watching, but I have been hit with the realization (way too many times at this point at my life) that sometimes, nothing goes your way. 2019 was abundant with historical dramas (aka sageuk) after the seemingly empty year in the sageuk drought of 2018, hence I had the intention of watching every single sageuk offering in 2019. But then, nothing goes my way, either. Here’s a review of the shows I have attempted to watch this year.

Ever since the first news about Yeo Jin-goo being cast in the drama came out in October 2018, I had been super excited about it ever since. The news only got better when Lee Se-young also joined the production as the queen. Adapted from the hit movie Masquerade starring Lee Byung-hun, Han Hyo-joo, and Ryu Seung-ryong, the drama version boasted youthful but nevertheless strong main lineup: Yeo jin-goo, Lee Se-young, and Kim Sang-kyung. While it was first reported as a drama remake of the movie, it was not until the premiere when it was clear that The Crowned Clown (Korean title Man Who Became King) only made use of the concept, while injecting new life into the plot and the characters. For instance, instead of using the real-life figure Gwanghaegun as the titular king character, The Crowned Clown chose to use a fictional king character to allow more freedom in drawing his character. This was where the characters of the king Yi Heon and the clown Ha-seon became a proof of Yeo Jin-goo’s lifetime performance in this heart-stopping series, which, sadly, still deserves to get more attention. Perhaps, having someone who is as erratic as Yi Heon in real life might be too terrifying, but I just can’t stop thinking of the unfortunate soul. Even with the new year approaching, I still think a lot about him. Sorry Ha-seon, but Yi Heon ranked higher than you in my heart.

I’m sure that Kingdom was one of the most anticipated shows of 2019, and the countdown to its release had never felt longer. As an international viewer, it was a great thing to have it as an original Netflix series because we got to have it released with the English subtitles without more waiting time! However, I have to admit that the high expectation I had for the series, with its star-studded cast and production team, fell short because of many reasons. Maybe I was hoping for more action and more episodes, hence the six episodes released felt so short. Yes, there were lots of running and slick action, but it wasn’t enough for me! I need MORE! Gosh, perhaps I am too used to kdramas getting their story through and ends everything right there, instead of delaying and stretching the storyline in order to break it into seasons…and we have to wait A WHOLE YEAR for the second season. The ending left me writhing in agony, and I could remember vividly myself groaning frustratingly at the screen. I have to admit that it is one of the reasons why I am thankful 2020 is approaching real soon, because I need the closure to this. BUT I heard that there will be another season…um, kdrama gods, help me again this time.

The drama, which was penned by sageuk writer Kim Yi-young, was one of the sageuk I looked forward to. Her script is like a comfort food; a reminiscence of the good old historicals, which might not be everyone’s cup of tea. Still, I like how her shows are always a mix of the palace intrigues and lesser known government agencies of Joseon, offering a slightly different take on the court politics. Although I had to wait for a bit until my obsession with The Crowned Clown cooled down a bit, it was worth the wait. Jung Il-woo, in his post-military comeback project, portrayed another version of Prince Yeoning, who would later become King Yeongjo. As the powerless, unpopular prince amidst the growing tension between the supporters of the Crown Prince (later King Gyeongjong) and Prince Yeongryeong, his association with Saheonbu, a body which addressed the citizens’ plights with regard to the officials such as power abuse and mistreatment opened up his path to the throne. The only gripe I had was the lack of spotlight on the female characters. Prince Yeoning had a number of female characters around him introduced into the story, but it was such a waste that we didn’t get to see more of them. Plus, with Go Ara’s injury which required her to be absent for quite a while made it even more jarring. It did feel like a generic sageuk, in a way, thanks to the abundance of male characters on the screen.

This pre-produced drama of Yeo Jin-goo finally found its broadcaster after a few months, and to be honest, no one probably thought that it would be watchable. Trust me, because I too thought of that. So, I was planning to give the first two episodes a try, just for the sake of being loyal to our Jin-goo. Well…the rest was history, because it was somehow watchable at first and turned out to be a show with lots of hearts. It was a remake of the popular Jdrama Zettai Kareshi/Absolute Boyfriend, but it had been years since the age of remaking Jdorama into Kdramas. We also had a slew of robot-themed kdramas in 2018 like I Am Not A Robot and Are You Human Too, but personally, I think that My Absolute Boyfriend relied more on the issue of love and less on the issue of Young-goo being a robot himself. In fact, one of the reasons I decided to stick with the show (apart from the obvious reason being our Jing-goo hehe) was for the lesson on love. A surprise keeper, indeed.

There was no doubt that the drama was tailor-made for Jang Man-wol: A drama about Man-wol, made for Man-wol, and flourished because of Man-wol. Despite receiving mixed reviews early on, being touted as a second coming of Master’s Sun as well as the continuous plea from people wishing for more of the past scenes, the series waded through the criticisms and enjoyed a steady stream of high ratings. The featured ghosts were not that scary for me, since I felt less spooked compared to that time when I watched Master’s Sun, but it could also be attributed to me growing out of my scaredy cat phase, somehow. Although Del Luna was the latest offering from Hong Sisters, the drama didn’t have their signature and people might not believe that it was written by them.

Be Melodramatic/Melo is My Nature

At first, it seemed that the characters talked a lot. Like, A LOT. But soon, their chattering turned into soothing voices in my ears. It was like listening to your friends talking, and Be Melo became my companion on my daily commute. That was until it made me giggle and grin on the train like a lunatic, so I thought that maybe it would be better if I watch it when I was by myself. It would make you laugh, and then cry, and then cringe….and the cycle would repeat itself. It was easy to relate to them despite living in a different world from them, and it made me wish that I had a close-knit circle of friends like them. Ahh…now I’m sad. But remembering all the meta, especially the PPL one (which sent me into a laughing fit), I think I’m okay again. I need to rewatch this soon! 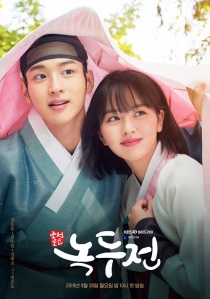 Beautiful, really a beautiful one. I had my doubts prior to watching the first episode (I’m always doubtful by nature, even in my drama watching activity) but I fell hard just after watching the first episode. It made me believe again that it’s not that difficult to love a drama, as long as you’re open to anything. I was pretty miffed when the darn baseball caused it to be pre-empted, breaking the momentum of the ratings, but I am thankful to this day that the plot continued trodding along without much problem. The first act was a laugh-out-loud one, where I found myself giggling and cackling at 1AM. The second act was a 180-degree change from the light atmosphere of the first one and it was heartbreaking for everyone involved, despite knowing well that it would be leading to the sad part. Some people felt that the change in tone was so abrupt that it was giving them whiplash, but it was my strong love for Nok-du and Dong-joo (and the family!), as well as the wonderful camerawork which made me stay until the rewarding end. I was nursing my withdrawal from this up until recently, and I wasn’t watching anything for a month!

I’m sorry…despite my love for Kim Seon-ho and my adoration towards Moon Ga-young, I guess I’m still very attached to the first season.

Strangers from Hell/Hell is Other People

Jong-woo was surrounded by a bunch of annoying people and I feel my blood surging at the sight of his colleagues. So…pass, for now.