How did you get the opportunity to become an actor?

I appeared on the news after catching a robber in a convenience store robbery case, and the current agency contacted me after watching the news. After the discussion between my parents and the agency, also after much consideration coming from me myself, I decided to walk the path of becoming an actor.

Who is your role model, if you have any?

Actor Song Kang-ho. I have always liked watching movies long before I consider becoming a full-time actor, and I have always picked Song Kang-ho sunbae-nim as my favourite actor. There are a lot of reasons I choose him as my role model. First, his acting is really great and the good message is always delivered well to the mass through his acting. I think that there are a lot of things to be learned from him.

What is the most important thing for a new actor?

Confidence. “Why I always get nervous when I go to the audition or the filming set, causing my words and actions to turn out unnatural and stiff?” I have always given this a thought. I used to worry a lot regarding how people who watched over me would think of my acting. I think that having confidence while you act is the most important thing. Of course, that goes along with analysing the script diligently (as you act).

A year-end movie you would like to recommend to the readers?

Joy. I like the films directed by David O. Russell, and Joy, despite being a slow moving film, is heart-warming and gives hopeful energy to me. I think it will be a good watch, since one can start the New Year with the strong passion attained from watching the film.

What are the three things you can’t live without in your daily life?

The first one is water! I am someone who usually drink a lot of water. The second one is glasses! They become my pair of eyes when I don’t put on my lenses…and the third one is cellphone! I won’t be able to do anything without it. Hehe.

What would you do when you feel down?

I really love eating delicious food. I don’t have any particular favourite food and I would visit famous restaurants by myself if I have to. Hence, as I have enough rest and eat good food, I can recharge my mood.

The best thing in the world?

Family! Because family is always on my side and they are my source of strength!

The thing you’re really immersed into these days?

The drama I am filming right now, Solomon’s Perjury. I get nervous the more I get absorbed into the drama, but I have to thank my adopted father in the drama, Jo Jae-hyun sunbaenim, who holds the drama together. As a rookie actor, he becomes a huge source of strength to me with his endless consideration towards me, fellow actors, and also the staff. I am very thankful for that.

What kind of actor you would want to be remembered as in the future?

Rather than simply being remembered, nothing makes me happier than having people finding joy and happiness channeled through my acting for a long time.

The thing you really want to do before this winter ends?

I don’t mind if it’s not far or just for a short while, but I really want to get together with my family and spend some time traveling with them. 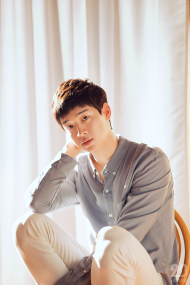