I’m still drunk with happiness mixed with shock over here. Tae-ik and Man-ok…both of you could kill me with your cuteness. I can watch them playing around with each other on my screen forever. 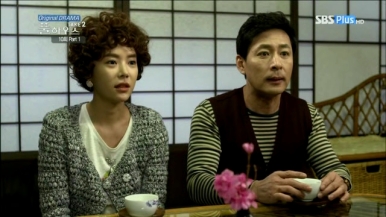 As Man-ok finally met Tae-ik in Japan, Kang-hwi was alone, thinking about what the doctor and LJ said to him. LJ was still unable to locate him and he’s even pressured when Hwa-ming kept asking about Kang-hwi. He’s about to send people to look for Kang-hwi but the guy went to meet him. Kang-hwi agreed to return to U Entertainment with the condition that Man-ok would be his stylist. Although LJ looked reluctant after he heard his condition, he agreed to give it a try. Kang-hwi went back to the empty Full House and he’s all alone there. He saw the drawing of Tae-ik that Man-ok made and remembered how worried she was when Tae-ik disappeared. Tae-ik had recovered from the shock of seeing Man-ok earlier. He refused to go back with Man-ok and Manager Hwang, leading them to stay there until he would return with them. Kang-hwi found out from Go-dong that he would be going to Japan, but both of them didn’t know where Tae-ik, Man-ok, and Manager Hwang were at the moment.

On the next morning, Man-ok saw Tae-ik going out while she was exercising and decided to chase him with a bicycle. They ended up on a ferry and it took a while for Man-ok to find him. He refused to allow her to tag along with him but soon made her his driver for the day. He brought to an island with some wishing shells hanging down from the tree branches. As Man-ok looked at those shells, Tae-ik confessed to her. She was shocked but soon closed her eyes as Tae-ik leaned closer towards her…

..and he was actually reading one of the wish written on the shell. Man-ok was upset to be fooled by him and dragged him into a shop selling the shells. He refused to buy her one and she threatened to cry out his name like a kid. He gave in to her and bought it, but she only wrote ‘Growth’ on the expensive wishing shell. Man-ok felt it’s a waste that Tae-ik didn’t write his wish, but he did it secretly; his wish was ‘to protect the people he loves’. They then went to see a Japanese theater. A local man thought that they were on their honeymoon and showed a place where lovers wished for their love to be forever. Tae-ik went there to pray silently as Man-ok looked over him. 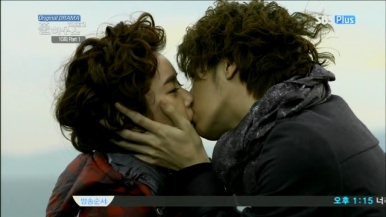 While they were walking together, he asked why she came to look for him and she couldn’t really give the answer. They decided to return to the guest house. On the ferry, Tae-ik kept staring at Man-ok’s lips and he got closer and closer to kiss her, but she suddenly woke up. He feigned seasickness and both of them went to get some fresh air. Tae-ik again asked the reason why she came to find him and she in return asked what was the reason he decided to give up on Full House. He then kissed her, right on her lips. 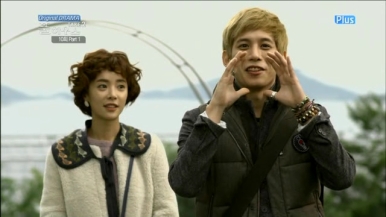 Kang-hwi had arrived in Japan together with Se-ryung. Tae-ik and Man-ok safely returned to the guest house and Manager Hwang could sense that something was going on between them. They saw Kang-hwi and Se-ryung on the television and the tow of them even went to a function together. It was just a show as Kang-hwi and Se-ryung were still on bad terms with each other. Manager Hwang told Man-ok to meet Kang-hwi to find out why he decided to join U Entertainment again. They kept the meeting a secret from Tae-ik. Man-ok and Kang-hwi went shopping together and then visited a tourist spot. He thanked her for staying by his side when he was having a hard time and asked whether she would continue to stay beside him in the future… 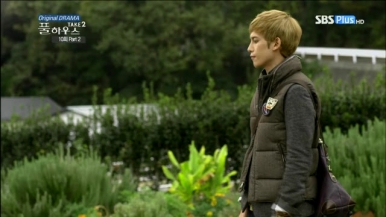 Kang-hwi actually treated Man-ok a meal before they went shopping. Man-ok tried to ask about the recording tape, but Kang-hwi purposely avoided the topic. She kept asking about it and Kang-hwi told her not to ask anymore as he never asked why she was in Japan. Kang-hwi then confessed his feelings to her, but before she could give her answer, her phone rang. She answered the call as Kang-hwi looked at her from afar with disappointment in his eyes. Tae-ik was the one who called Man-ok, asking where she was. Manager Hwang tried to persuade him to go back with them to Korea but Tae-ik remained firm with his decision to stay there for the time being. Man-ok got a text from Kang-hwi, who wanted to meet her once she return to Korea. She saw Tae-ik’s fans gathering in front of the guest house. 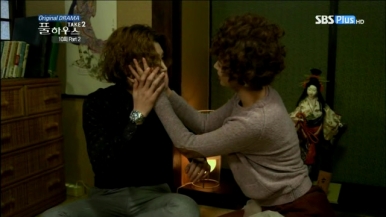 Man-ok brought some drinks for Tae-ik and she eventually got drunk while persuading him to go back with her. She started rambling about them oney she spent to find him there and wondered why his fans loved a guy like him to death before passing out on his lap. Tae-ik walked out as he kept thinking about his fans and saw the fans kept cheering for him, pleading him to return to his place. He was moved and tears streamed down his face. The next morning, Man-ok packed her things and prepared to return to Korea as she couldn’t change her ticket. She sent a text to Kang-hwi,promising that she would meet him in Seoul. Manager Hwang and Man-ok thanked Tae-ik’s aunt for taking good care of them. Tae-ik’s mom wanted to follow them, but Man-ok assured her that Tae-ik would bring her there soon. Tae-ik, on the other hand, was nowhere to be found. He’s already waiting at the airport and decided to follow them home.

Kang-hwi, who was also scheduled to return to Korea on the same day, saw Tae-ik and Man-ok getting all close and comfortable with each other. LJ tried to talk about his condition to make Man-ok his stylist, but he refuse to negotiate with him about it. They arrived in Korea shortly after that and the fans, including the Paparazzi Trio, were already waiting for Kang-hwi. It’s completely different for Tae-ik and Man-ok, who had to disguise themselves. They were puzzled as why there wasn’t any reporter around. The reporters were actually there but busy with Kang-hwi’s simple interview. As Full House was now in LJ’s possession, Man-ok wondered where Tae-ik would be staying for the time being. Manager Hwang brought them back to his messy house. 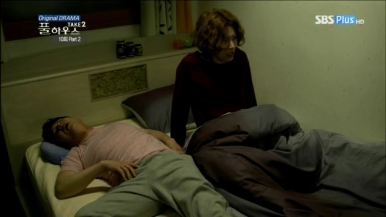 Man-ok was worried to see the small, messy house and wondered whether Tae-ik could survive staying there, but he assureed her he would be able to do so and told her to go home. On her way home, Man-ok got a call from LJ. Tae-ik had his first night at the house and he’s agitated with Manager Hwang’s snoring. He saw a cockroach and screamed out loudly, causing Manager Hwang to wake up in surprise. Tae-ik immediately called Man-ok to complaint about the strange noise he heard at the house and she chuckled when he’s actually afraid of bugs. She’s still walking home and Tae-ik knew that she wasn’t home yet. He was actually waiting in front of her house with his little luggage. She was shocked to see him there when it was already midnight and he asked whether he could stay with her in the house.

Dates, confessions, and cohabitation again. Someone slap me. I feel like dreaming…and I think I’m on cloud nine! 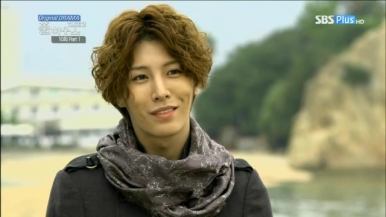 This episode was certainly reserved only for Tae-ik and Man-ok. They were adorable together and it’s hard not to ship them as I watched the series. They didn’t try very hard to look and act like a couple, but it’s the mutual feelings they had  for each other that made them compatible. Ignore the noodle hair, they were match made in heaven! Although Man-ok’s protective side and Tae-ik’s childish antics made them like a pair of mother and son, he knew how to act like a man to protect the woman he cherished. Okay, enough of this talk about feelings, I can’t describe it well. Hahahaha! Let’s just wait for their love to prevail slowly~

Kang-hwi was still adorable (especially in that duck suit!) in this episode, but I couldn’t see him with Man-ok. True, she treated him well but he’s just a good friend to him, not more than that. I hope he would realize it soon and stop courting her. It would make him less pitiful and saved himself from the pain of rejection. I don’t really want to hate him and hoping that he won’t do something drastic to split the OTP apart. Nothing should happen to my OTP!

But with grandpa coming back to the hapkido school/Man-ok’s house, what will happen to them? Sheesh, look who’s impatient over here! *ro