With  three episodes left but another  two weekends until the final episode, nothing is set in stone about the fate of the characters in tvn’s weekend ratings monster Mr Sunshine. Although I intended to wait until the drama finishes its run, I just had to take a short peek at it…and that’s it, I’m doomed. Hence, begins the long nights (and days) of browsing without subtitles and replaying episodes until I can’t remember where I actually stop the night before. If there’s something called ‘drunk over dramas’, then this feeling is probably close to that. Or maybe, even better. Just like how ‘love’ is better than shooting a gun or getting a government post for Ae-shin.

(Find the show on NETFLIX)

Apart from the slow burn of that drunk feeling watching the drama unfolds, Mr Sunshine is like a rare opportunity to have an insight on the rarely portrayed era of Korean History. There are lots of distortions in the name of artistic license, but it presents a starting point for those who want to know more about the era. As for me myself, it doesn’t take long for Ae-shin’s confidence to bewitch me, and the show becomes some sort of a mini runway for my inner hanbok lover. It’s difficult not to love Ae-shin’s modesty and pride with each strut she takes, the confidence and prudence hidden beneath the half-concealed face of her. From staring at her parade of colourful jackets and skirts, I also notice how the fashion of the late 19th century Joseon changed tremendously, and some of the clothing articles previously exclusive to the nobles would trickle down to the commoners and made more accessible to them.

This is not really a full-fledged hanbok post of the Enlightenment Period of Joseon, but rather a post to recall and rediscover things I have missed over the years. So..enjoy?!

Nanmo 난모 is a general term used to refer to all caps worn to protect oneself from cold during winter, or in other words, winter hats. Joseon has several types of winter hats, worn either by themselves or under other daily hats.

Ayam 아얌, or its Hanja name aegeom 액엄(額掩), is a winter hat covering one’s forehead and neck. It is easily identified by its long tail part,  often decorated with ornamental gems and precious stones. Although it was primarily used by noble women during winter, it came to become a fashion statement for women in late Joseon, often used as outdoor hat then. 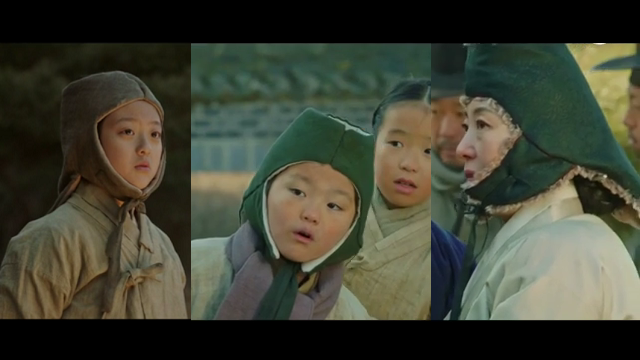 Pungcha 풍차 (風遮) is a winter hat that cover one’s neck and ears. It has attached flaps to be tied under the chin. It started out as a cap for the noblemen but became a staple of both genders, from the aristocrats to common people. It is made from variety of fabric, from cotton and arrowroot to silk, lined with fur and stuffed with cotton to provide warmth to the wearer. The Enlightenment Period actually saw a decrease in popularity for pungcha, replaced by the simpler nambawi. Nambawi 남바위 resembles pungcha but without the flaps. For those who wore nambawi, they would wear an extra head wrap underneath called bolkki 볼끼, tied under the chin. 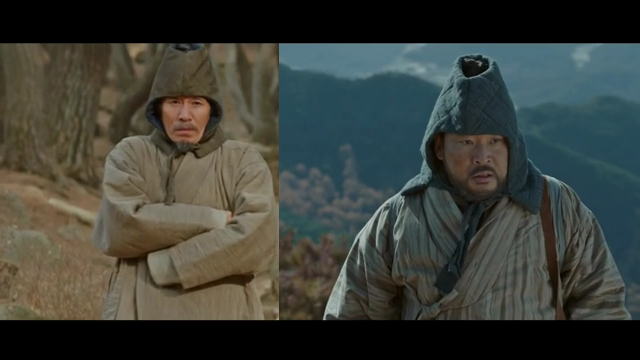 For those putting practicality above style, they would have opted for hwiyang 휘양. Also referred to using various names like hohang 호항(護項) and pungryeong 풍령(風領), the head cover is used to protect the head, neck, and sometimes covering both shoulders from the cold. It is usually worn by older men and military personnel in cold winter.

I’m not really sure if they ever used to tie those scarves around the neck back then, but everyone’s sporting that look in the drama. Mokdori 목도리 is the common term for the scarf tied around the neck, and everyone – from Haman Daek to Ae-shin – wear it. 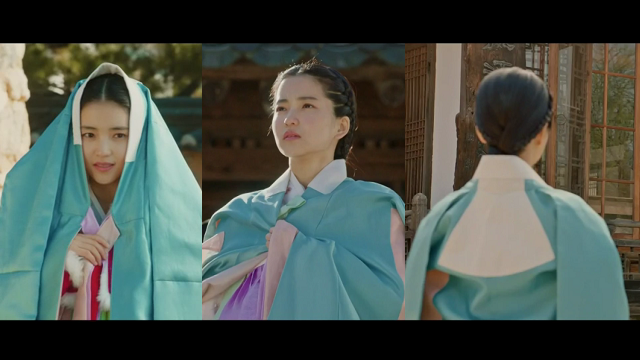 We’ve reached the best part of Ae-shin’s clothing article, which is the jangot 장옷. Its other names include myeonsa 면사 (面紗) and jangui 장의 (長衣). Jangot is a type of head cover…or more like a hood that looks like durumagi, Joseon’s topcoat. Unlike Western hood, it has visible sleeves, collar, and cuffs. It also has multiple ribbons, a pair outside and another pair just below the collar part. It is said to have originated from men’s topcoat and came to be used by women (especially the nobles) as a head cover, with only the face of the wearer visible, peeking out of the cover. The outside pair of ribbons is for decorative purpose, while the inner pair is used for the wearer to hold onto. Although the traditional Joseon jangot was made of dark coloured silks with white cuffs, Ae-shin is seen sporting various colours from light to striking ones.

I thought that Haman Daek’s head cover looks so familiar, and it turns out to be cheonui 천의. It is a square head cover tied at the back of the head. Shaped like an apron and sleeveless, it was used by commoners (especially female) during winter and also when they are farming. It is shorter than jangot and sseugae chima.

Although there were no gloves, Joseon created something called sontoshi 손토시 or hand wristlets. These wristlets are seasonal wear: they are worn as warmers in winter, made from silk and lined with precious furs for the aristocrats or from thick cotton and hemp for the ordinary people; and made from rattan to allow wind to enter the sleeves during hot summer. These are easily removable, just like normal gloves. 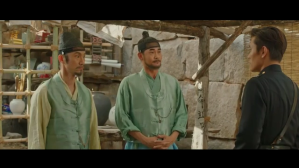 Joseon also has its own version of waistcoats and jackets. First is baeja 배자 (背子), the sleeveless outer jacket similar to Western’s waistcoat. It is worn on top of jeogori; while it is a short clothing article, the length closely follows that of the jeogori. Its origin can be traced back to Silla Dynasty’s baedang, a longer version of the jacket. Ae-shin is seen wearing very short baeja since her jeogori is short, while the Jeondangpo Brothers have longer men baeja. When the jacket is lined with fur for winter wear, it is called teolbaeja 털배자, meaning fur sleeveless jacket. 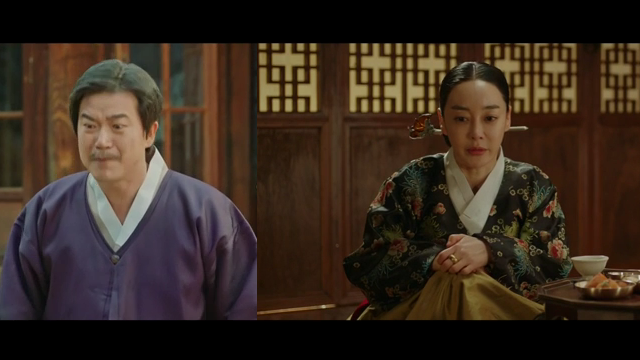 Magoja 마고자 became popular with the return of Heungseon Daewongun from China in 1887, when the Emperor’s father wore the coat originated from Manchu. Long-sleeved and wide-collared, the outer coat has one or two buttons to fasten the flaps. The length, just like baeja, follows that of the jeogori, hence the longer magoja worn by men and the shorter one for women. 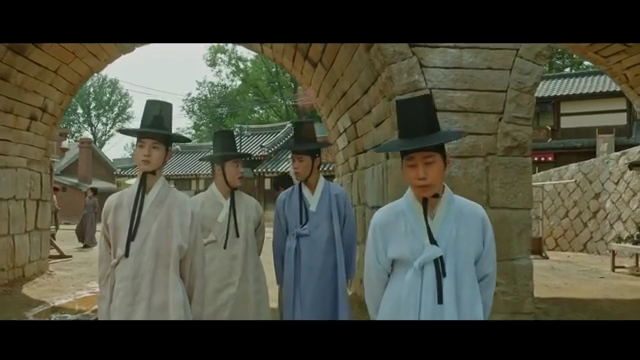 The nobles, mostly the yet-to-be-enlightened, are easily spotted by their long outer coat called durumagi 두루마기. It became the standard outer coat when Gojong promoted thriftiness; he enforced the usage of the narrow-sleeved durumagi and prohibited the wide-sleeved dopo, except in Confucian rituals. I think Mr Sunshine does take liberty in designing Ae-shin’s coats, combining the looks and usage of durumagi and jangot. Although durumagi is characterized by single coloured fabric except for the collar (while jangot has different coloured fabric for its cuff and outer straps), Ae-shin often wears her jangot like an outer coat, hence turning the head cover into her outer coat. It is a creative move, since jangot does resemble durumagi a lot and it is not easy to differentiate them.

Just like the outer jacket, the jeogori or the top jacket itself underwent gradual changes throughout the dynasty, be it the design or the length. By the time it reached the 19th century, jeogori had become shorter and the sleeves narrower, to the point of showing off the inner string, the inner top and the chest wrap. An goreum 안고름 or aegyo goreum 애교고름 is the inner string of the jeogori. It is the narrow, striking string peeking from the bottom of the jeogori, almost under the arm. It is used to tie the inner flap of the top jacket or jeogori inside and hidden all the time during early Joseon, since jeogori was longer back then. However, from the mid-Joseon onward, aegyo goreum became a fashion item itself due to its association with the Joseon trendsetter, gisaeng or courtesans. 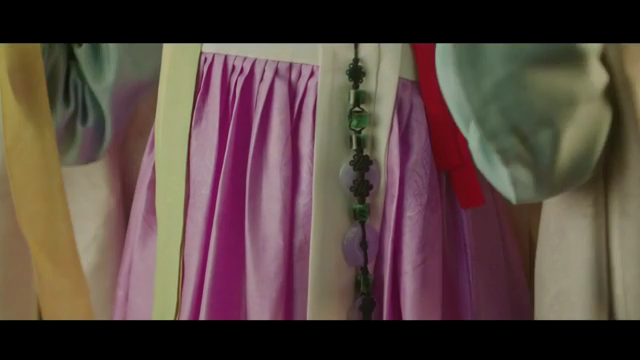 The white and slightly wider string behind the ornamental pendant or norigae is called nunmul goreum 눈물거름. The name is said to have originated from the unintentional usage of it, which is for the new bride to wipe her tears during her wedding. It is hung from the skirt string together with the norigae in order to show off the beauty of the pendant. Since it was a pricey feat to acquire a pendant, only the noble women could afford and wear those, hence the usage of nunmul goreum was only seen among them. Hence, the other name yangban goreum 양반거름, meaning “nobleman’s string”. If the string is embroidered, it is also called hyangdae 향대. 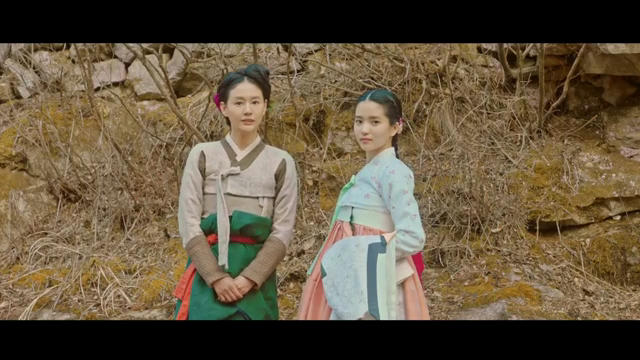 The chest wrap goes by many, many names… gaseum garigae 가슴가리개, gaseum ssagae 가슴싸개, gaseum dureugae 가슴두르개, and gaseum joigae 가슴조이개, just to name a few. Its function is to cover the chest part, and while it used to be one of the undergarments, the short jeogori made the chest wrap visible. It was worn underneath the skirt or chima, but as time went by, it was wrapped on the chima‘s top, so that it could cover the chest as well as making it easier for breastfeeding moms. Another type of skirt called malgi chima 말기치마 combines the wrap, most of the time white in colour, with the bright coloured skirt, so that they don’t have to do the same job twice. 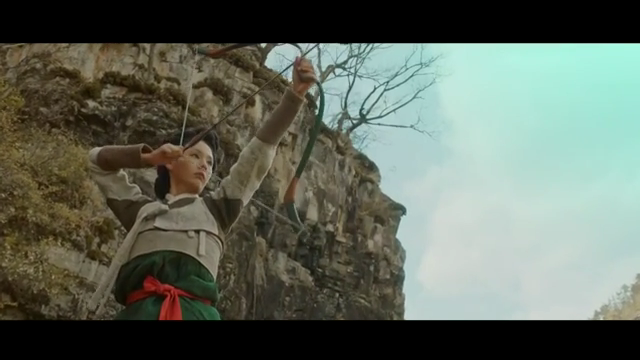 I have tried searching high and low for other names, but only this one turned up in the search. Heoritti 허리띠, literally the “waist string”, is the string tied around the skirt to lift it, making it appear shorter. It used by mostly by tavern owners and cooks in place of their aprons. Women would also utilize this when they want to do work that involve lots of movement, since the long skirt would hinder them from doing so. Gisaeng would tie red heoritti around her skirt as a way of showing off their flowing skirts and the blooming petticoats underneath.

And…that’s a wrap for now! I think we won’t be seeing much of the hanbok in Mr Sunshine from now on, since Ae-shin is mostly seen wearing her tailored suits during her missions. Still, it is nice to see lots of colours being thrown in by the costume designers, and…yeah. That’s all. I need a drink for all the tears I’ve shed for this drama. Questions, suggestions, and additional information are always welcomed here ❤

12 thoughts on “Shining Hanbok Under the Sun”