I always say that time flies, but… how is it already September?! Despite me still trying to grasp its arrival, I realise that it’s almost the end of another year once again. Admittedly, I haven’t been on task with watching kdramas lately (the newest one I’m currently following though is Live Up to Your Name). Prior to this I caught Secret Forest (aka Stranger) and I am glad to report that I wasn’t disappointed – it had everything I just needed in a drama. Not everything needs to be dramatic and real happening; mere, small moments if enacted sufficiently well are enough to impact viewers. Every week, I found myself looking forward to watch it and at the end there was a point I actually felt that we got there so quick, hah. From the news release about the drama to the anticipation (it was Jo Seung-woo’s and Bae Doo-na’s dramaland comeback after 3 and 7 years respectively) all the way until it finished its run, it was actually months long. But oh boy, how hard the withdrawals hit. 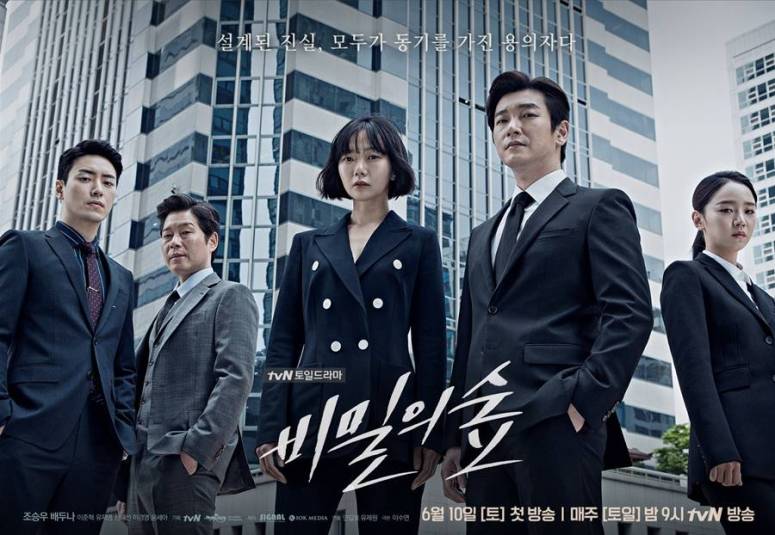 As some of you may know, I am a huge fan of the crime genre so Secret Forest was already right up my alley. In short, it tells a story of how the prosecution and police work together to solve a case, also revealing other secrets in the process. The premise would be rather predictable for kdrama fans but what set it apart was brilliance in execution, acting and the largely tight writing. Just like any drama, it takes many aspects for something to work and I think many reasons contributed to its success and my enjoyment.

Some general thoughts: it started out well and remained consistently good throughout which is quite rare for kdramas, given that many of them go downhill halfway through. The cast, from the leads all the way to the side characters brought Secret Forest to another level. The background music and soundtracks was another plus point – it fitted so well and just added to the feels brought about by the story itself. *Mild spoilers ahead

Jo Seung-woo is a more familiar face in Chungmuro – many know him for starring in movies. Most recently he played a prosecutor in political thriller Inside Men, while his last drama was God’s Gift – 14 Days alongside Lee Bo-young. This time, he was able to showcase a different side of him as cold and emotionless prosecutor Hwang Shi-mok. His portrayal was accurate and stayed true to the character. His micro-expressions and subtle changes in emotion were really well done – it was fun for me personally, to notice these small changes in expression. It is difficult to relate to Shi-mok due to his lack of emotion, but Jo Seung-woo did great 🙂 My mood unknowingly changed with him as I followed him through his investigation journey.

Bae Doo-na finally took a trip back to dramaland since 2010’s Gloria and it was an absolutely worthwhile one. She nailed many of her scenes although the development for her character as detective Han Yeo-jin was slightly lacking. It was a delight to see her in a drama again after a long time. Without a doubt, her performance was a heart-stirring one – Yeo-jin’s passion for justice and seeking the truth could be felt. Amidst the darkness and tension in the narrative, she remained warm-hearted as always. One particular scene which left a deep impression on me was the dialogue between her and police chief Kim. Kudos to both actors for a great job well done. [I will not go into detail, watch it if you want to know 😉 ] Just before Secret Forest she played Sun in American television series Sense 8 which she was popular in too. Yeo-jin was the opposite of Shi-mok in terms of personality and they slowly but surely became a memorable duo. 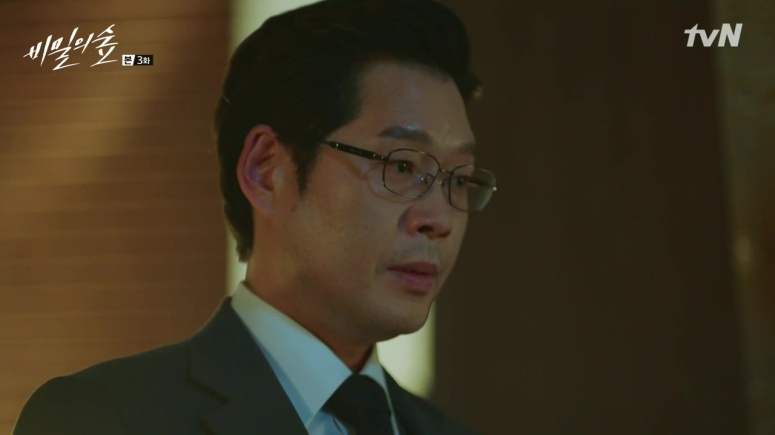 Yoo Jae-myung was a major scene stealer in Secret Forest as the morally grey Lee Chang-jun. Thanks to this role, more drama fans recognise him now and magazines Esquire and Harper’s Bazaar (KR) have featured him in the past month. He was also in Jealousy Incarnate, Reply 1988 and The Good Wife as an attorney, just to name a few. His character is also very different from past roles he has played in previous dramas, for instance comedic purposes. This time he takes a 360° turn to star as the shady chief prosecutor and is finally getting the recognition he deserves. Watching him here opened my eyes to his masterful acting, I am truly happy for him becoming known these days. And his tall body frame makes him look great in suits ❤ He was also in film A Day (Haru 하루) alongside Kim Myung-min and Byun Yo-han, that was released in Korean theatres this June. 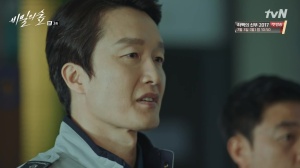 The leads clicked well together without any loveline – there was good chemistry. It was nice to see their blossoming friendship and subsequent deepening of the bond forged. I liked how Shi-mok became more receptive to Yeo-jin, sharing his thoughts as they discussed the cases and many more. By the end, they came a long way as friends and two individuals who respected each other. I also enjoyed the scenes with Shi-mok and our resident chief prosecutor – they were my personal favourite. The tension between them, and the complex emotions involved – it was one of the best in the drama. Other members of the cast whom I thought were also scene stealers include Lee Kyoung-young as Chairman Lee Yun-beom (chief prosecutor Lee’s father-in-law) and Choi Byung-mo as police chief Kim Woo-gyun; just conveying some appreciation here. Yoon Se-ah, who starred as Chairman Lee’s daughter and Chief Prosecutor Lee Chang-jun’s wife also shone although she didn’t have many scenes.

Lee Joon-hyuk takes on the role of a prosecutor once again after City Hunter, but Seo Dong-jae is very much different from Kim Young-joo. Dong-jae is ambitious and plots to stay in the good books of his superior, though not very smart in doing so. Sometimes he even turned out to be comedic relief for the drama, ironically. This is also a much better performance from the actor; I am pretty sure I will remember Dong-jae in the long run. I also watched him in drama short Naked Fireman earlier this year, which was rather enjoyable. It is just 4 episodes long, check it out if you’re looking for something short and sweet. 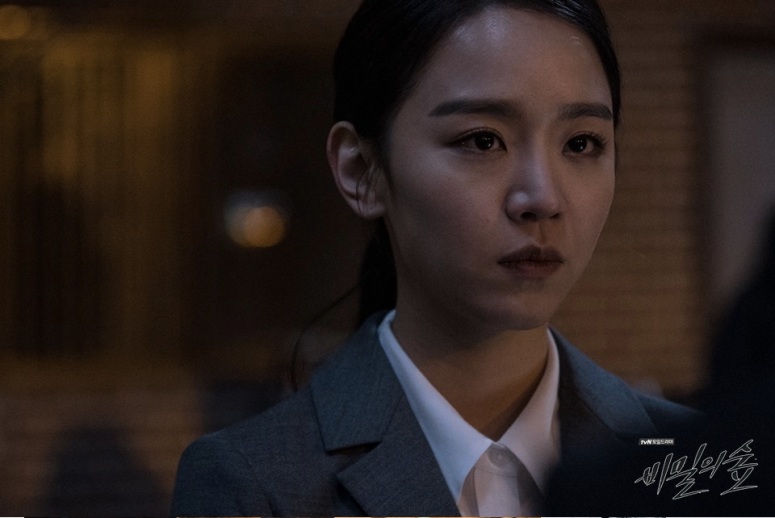 Shin Hye-sun stars as junior prosecutor Young Eun-soo who looks up to Shi-mok, always wanting to do her best to help. The main gripe I have about her character is that her actions something do not make sense and feel unnecessary. At some point it did feel like she was a plot device, especially with her one-sided crush on the hero. Nevertheless, I did feel for her when she genuinely wanted to help out her father and in that regard, the writer made it a point to help us understand her. Before I move on I would like to give a shoutout to Lee Kyu-hyung, who starred as section chief Yoon Se-won. Not only was his character well-written, his portrayal really impressed me and I enjoyed getting to know Section Chief Yoon through the drama. I will certainly be looking out for this actor in the future, and hope more good projects come his way.

As with many crime kdramas, corruption is a core element in Secret Forest. The drama explores how the legal system can be a double-edged sword, from the prosecution to the police. It is so powerful that it can be uplifting, and yet only takes the blink of an eye for it to become a weapon. That is why people abuse it and I think the show did well in the depiction of this theme because it was grounded in the reality that society faces today. The realism made it all the more relatable and heartbreaking at some points, because some of these things actually happen in the real world around us. An example would be Park Kyung-wan’s (Jang Sung-bum) incident with the police. Again, watch it to find out more 😉

The writing was tight overall through the 16-epsiode drama – reveals were well-placed and it had a good pace. The dialogue was interesting as well, and in some parts it was heavier than others which meant closer attention needed. Penned by Lee Soo-yeon in her first drama outing, she sent viewers on a ride that was consistent, laden with twists and little surprises. While watching, you’ll have fun unravelling those layers. More questions would come with it for sure, but it is a forest of secrets after all. The precious cast also brought Secret Forest to greater heights.  All of them – every character exchange contributed to this. Anyway, the cast seems to have become really close since the filming and have since had several gatherings together as Bae Doo-na has posted on her Instagram. They even had Insta-lives XD In addition, I give an A+ for the background music in the drama; including the track used for the opening sequence. The original soundtrack (OST) can be found on tvN’s official YouTube channel, like the one below. P.S. If you are not okay with spoilers, do not watch the video.

With that, I conclude my thoughts on Secret Forest. Do check it out if you haven’t done so and I hope you will like it! Thank you for reading ❤ and feel free to share your thoughts here.