Hope is not lost in times of despair.

Bang-won’s world seemed to have collapsed when he witnessed the father he respected yielded to In-gyeom, and the evil lord expected General Yi to display a submissive attitude in front of him. The boy himself went to confront In-gyeom, accusing the old man to be an evil person. But then, he couldn’t deny that what he overheard earlier proved that his father wasn’t entirely good-natured, and In-gyeom presented him with a question: were humans born evil or good from the beginning? Bang-won couldn’t hide his frustration at his father’s failure to rescue his friends and ran into the night.

Ddang-sae dreamed about his mother’s song and he got to recall the tune properly this time, but Boon-yi wasn’t interested in that since they’re still locked inside In-gyeom’s storage room. They had the chance to escape when the performers went there to put the instruments, and Boon-yi suggested that they hid inside the cart to get out of the house.

Although he got General Yi under control thanks to the play, In-gyeom was not satisfied because what happened was too good to be a pure coincidence. The message with the sword symbol was the reason for his dissatisfaction, because the sender seemed to know what he was planning and thinking. It was also the same in the year of 1374, when King Gongmin was assassinated: In-gyeom received a message with the same symbol informing him about the event, giving him the chance to have the government under his authority. Since then, he was curious about the identity of the people who helped him.

Sambong didn’t change his mind about General Yi yet, and Poeun learned about General Yi’s decision to go back to Hamju through a letter from his friend. Dongjeong Hong In-bang (Jeon Noh-min) decided to meet Sambong, as the rest of the Sadaebu (scholar-officials) found out about General Yi. In the midst of the confusion, two of the Sadaebu: Woo Hak-joo and Han Gu-yeong went to In-gyeom to find out who would be the representative during the meeting with Yuan envoys on the following day. His answer was a big surprise for everyone: it was Sambong. In-bang also found out about the appointment from a royal order at Sambong’s house, and he went straight to Sambong, knowing that he’s definitely planning something to stop the war. 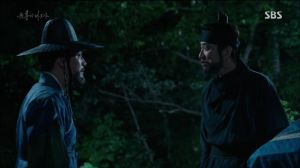 Sambong was out kidnapping the performers from In-gyeom’s house earlier and he only told In-bang to get ready to kill Baek Yoon in order to instigate suspicion among the evil trio. Ddang-sae, who was in the cart with the sleeping Boon-yi, overheard the conversation and he even followed Sambong to his secret lair. When he returned to the cart, a masked man was there and dragged him away to a hut. That man, Lee In-chang, was one of Sambong’s men, and he promised to let Ddang-sae off in the morning, but the boy was tied so that he won’t escape. The Sadaebu moved to track down Sambong because they were aware of his next move that was to kill the Yuan envoy, and Poeun could see that it was all a trap set by In-gyeom. 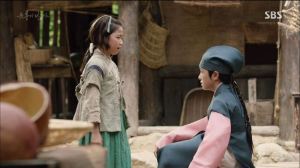 Bang-won actually went to the beggar’s abode and stayed there for the night despite the leader’s complaint. When Boon-yi came back asking for his help to save Ddang-sae, Bang-won only said that his father couldn’t do so. Boon-yi accused him of lying about his father being powerful and all, so the kids got into a fight. Bang-won finally admitted that his father was just a powerless man, and Boon-yi cried, afraid of losing her own family if anything happened to Ddang-sae. At last, they asked for Young-gyu’s help for the matter. 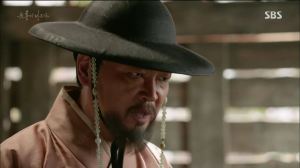 Hak-joo and Gu-yeong blocked Sambong and In-chang before they could leave the hut for the ceremony, refusing to let them go despite their plea. They resorted to humiliating Sambong’s and his original status when it was pointed out that they did have connection with In-gyeom. Poeun also did not let them go, afraid that they would drag all the Sadaebu into the matter if they failed. He believed that they could gather the scholars and continue to send appeals to the king to avoid the war instead of choosing the radical way like what Sambong was planning to do. However, Sambong believed otherwise and he kept stating that everyone knew that they envoy would be there. 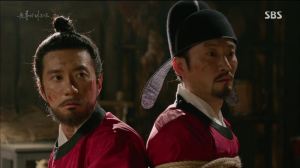 Young-gyu waited for the right time to charge at the two men guarding the hut, and the kids were surprised to see two adults being tied there once they entered the place. Ddang-sae was also there in the next room, and Boon-yi waited no more to teach the men a lesson for kidnapping her brother. Sambong tried to talk them into releasing him by bringing up war and In-gyeom’s name, and Bang-won asked him whether he could stop the was and defeat In-gyeom. Although he was skeptical about Sambong since his father couldn’t do anything about it, Sambong give his promise and Bang-won released them, sending the Sadaebu into emergency mode again, trying to find Sambong.

The ceremony was all set to receive the Yuan envoy and the scholars who were putting a strike right outside the gate were removed to make way for the national guests. But then, it was actually Tae-mi, disguising himself as the envoy. Of course, In-gyeom was there to enjoy the show that was about to unfold there, and Sambong charged at Tae-mi with something in his hand…

..but he was defeated easily in one blow. Tae-mi quickly introduced himself in front of the crowd, telling them about Sambong’s plan to kill the envoy that was leaked earlier. However, Sambong was also laughing, because the thing he was holding was only a taffy, not a knife. He was aware that there won’t be any envoy there – because he already sent a secret message to the real envoy – and informed the citizens about the real implication of forging ties with Yuan: an all-out war with the rising Ming Dynasty. That was the ploy by the evil trio to save themselves while the ordinary people had to suffer the loss of their family if the was broke out. 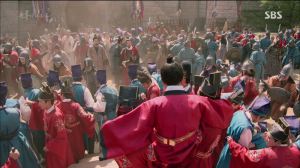 The scholars, young and old, were moved by Sambong’s speech, and Poeun understood what he was actually trying to achieve. The Sungkyunkwan scholars proceeded to protect Sambong from the guards who tried to arrest him. Bang-won witnessed everything in awe, seeing Sambong in a completely different light. The Yuan envoy was actually there and decided not to stay, fearing for their safety. Everyone tried to protect the scholars from the guards and the scene itself moved Sambong to tears. He started singing a song (Les Miserables, anyone?) echoed by the crowd as Bang-won, Ddang-sae, and Boon-yi stood outside the huge crowd.

Bang-won gave his approval, saying that the man in front of man was the strongest man, and the tune of the song was familiar to Ddang-sae, because it was the same song his mother used to sing..