A new beginning for them…or not?

We were shown what actually happened on Man-ok’s way back home. After receiving the call from LJ, she went to meet him at the company. He wanted her to come back and work for him as per her contract to pay back her debt. She didn’t have any other choice and walked out while lamenting her anger towards her luggage. Tae-ik arrived at Man-ok’s doorsteps before her and she’s surprised to see him there, pleading her to let him stay there. She set up a tent for him in the practice hall, but he refused to sleep in it and insisted to sleep in her house. She teased him about going back to Manager Hwang’s house and living with the cockroaches. Tae-ik finally agreed to sleep in the tent and Man-ok was kind enough to make him pay only the monthly rent. He suddenly asked whether she really wanted him to stay there for a long time. Man-ok stammered and stressed that she would make more money from his long stay there. Silence fell between them as they stared into each others’ eyes and they remembered about their kiss. Tae-ik was about to say something but Man-ok left in a hurry and told him to sleep. 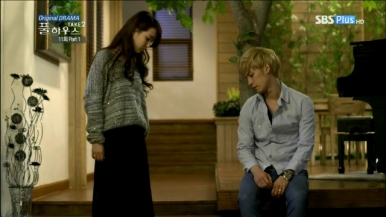 Man-ok kept thinking about Tae-ik but she reminded herself that he’s on a different level with her; hence she would be hurt if she liked him. At the Full House, Kang-hwi walked around the kitchen in darkness and looked at the glowing stars Man-ok put on the floor for him while thinking about her. Se-ryung interrupted his moment and tried to remove the stars, but he warned her not to touch them. He went back to the basement and looked at Man-ok’s last text to him as he pleaded her to call him. Well, she’s actually busy trying to make Tae-ik sleep instead of whining like a baby. She taught him an exercise but he suddenly felt too lazy to do it. He ended up doing it in the tent, but some crawling sounds made him scream, again. On the next morning, Manager Hwang called Man-ok to inform her that Tae-ik was missing, but soon she told him about Tae-ik coming to stay in her house. She was surprised to see Tae-ik calling a pest control company to get rid of those pests. She made them leave and told him to do all the cleaning himself. 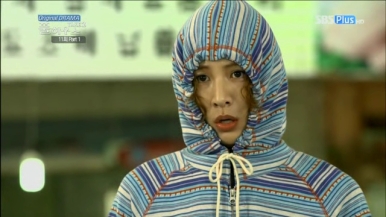 While Manager Hwang was busy finding his friends in the entertainment industry to be contacted, Tae-ik cleaned the whole practice hall and Man-ok awarded him by eating outside. She disguised him to avoid drawing people’s attention and went to have a meal at a nearby restaurant. Tae-ik didn’t want to eat at first, but after the owner threatened to throw him out, he took a bite and couldn’t stop eating. They went to the market and he even got mistaken as a woman. Man-ok decided to get her hair done and made Tae-ik leave first. He arrived home to see the blue tracksuit boy in the hall. The boy declared Man-ok as his wife because she wasn’t married to Tae-ik and he wanted to marry her once he grew up. The boy wrote a reminder about Man-ok’s birthday on the calendar and Tae-ik was surprised to see that her birthday was on the next day.

LJ and Se-ryung brought a guest to Full House to meet Kang-hwi. The guest was no other than Hwa-ming and Kang-hwi was surprised to see her there. She wanted to make him the model for her clothes, but he didn’t agree to it. She chased after him and had a talk with him. She was actually Kang-hwi’s stepsister and she truly hoped that Kang-hwi would stand on her stage, just like what she imagined when they were kids. He was reluctant as he knew that his step family didn’t like to see him being close with Hwa-ming but at last, he agreed because of her. Man-ok finally got her hair done and she happily walked home. She peered into a shop’s window and saw Kang-hwi’s picture with the announcement that he’s the new brand model…

LJ told Kang-hwi that he’d have to wait for a while for Man-ok to come and work with them again. Se-ryung felt it’s weird as LJ paid so much attention on Kang-hwi and knew that LJ found out about Kang-hwi’s feelings towards Man-ok. LJ also overheard Go-dong talking to Man-ok about Tae-ik and Manager Hwang. Man-ok told Manager Hwang about the contract problem and he promised to help her. He also thought that Kang-hwi must had reasons for him to go back to LJ just like that. She went home and Tae-ik wasn’t there. He’s off to buy some cupcakes for her birthday and saw a replica of her pink scooter at the cafe. He eventually used Kang-hwi’s noona killer smile and voice to get the replica for Man-ok. She saw him with the shopping bag and tried to take a look, but stopped when he lied, saying that it’s his underwear. Ga-ryun suddenly dropped by, forcing Tae-ik to hide himself outside.

Man-ok successfully got rid of Ga-ryun and later, Tae-ik told her to come to the hall. He waited until miidnight and revealed the cupcakes he bought for her. She was shocked when Tae-ik gave her the shopping bag, thinking that it contained his underwear. He told her that it was a lie to hide the present from her. She was happy to receive the pink scooter replica and Tae-ik even sang her the birthday song. She then sneaked out her grandpa’s homemade wine for them and in between the drinks, she asked why he gave up everything for her back then. He admitted that he hated to see her having a hard time because of him and confessed that he like her. She chided him, calling him a fool because he never realized that she like him too. She kissed him and fell asleep before Tae-ik pulled her into his arms. 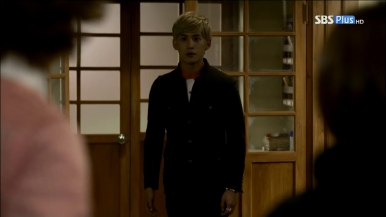 On the next day, grandpa arrived at the house while the two of them were still sleeping in each others’ arms. Man-ok was shocked to see him there without any notice. He even threw Tae-ik and Manager Hwang, who just arrived there. The three of them had to give an explanation and Manager Hwang told grandpa that Tae-ik was there for a hapkido boot camp with Man-ok. At the same time, Se-ryung tried to ask Kang-hwi about Man-ok’s house but he didn’t tell her anything. His sight suddenly became blurred and he fell down in front of her. He warned her not to do anything to Man-ok as she’s didn’t know anything about Tae-ik while pointing at the wrong direction. Se-ryung suspected that he couldn’t see as Kang-hwi reassured himself that he’s still fine. Grandpa agreed to let them to stay there for the time being and reminded Tae-ik to train diligently. Kang-hwi called Man-ok but she told him that she would call him later. Tae-ik was mad when he realized that Man-ok couldn’t recall her confession the night before but when he’s about to talk with her about it, Kang-hwi arrived there and entered the hall. Kang-hwi was surprised to see the two of them living there together…

New hair,new feelings, and new people in the house? Now that Kang-hwi and Tae-ik had met each other, a face-to-face competition couldn’t be avoided. There are many things that make me worried about them, especially Kang-hwi. When is he going to get his eyes treated? Hopefully show won’t make him go all blind at the end….my heart won’t be able to take it!